Baku, Azerbaijan, January 26, 2012. Rabita BAKU and their archrivals of Azerrail recently crossed their ways in the sixth round of the Azerbaijani Superleague for what was a very much awaited clash by all local Volleyball fans. 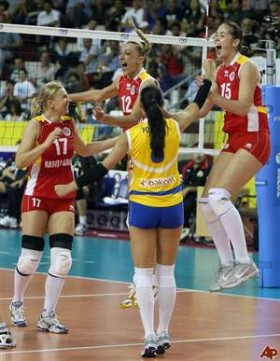 This game was a good test for both sides some days before the start of the 1/8 finals in the 2012 CEV Volleyball Champions League as they both long for advancing to the final four that will take place in late March in the capital city of Azerbaijan.

Having edged Azerrail in the finals of last year’s championship, Rabita did not concede any revenge and scored a speedy 3:0 win (25-14, 25-21, 25-20) with a great show being contributed by libero Silvija Popovic and middle blocker Dobriana Rabadzhieva.

Azerrail could keep the balance only in the second set via the help of Italy’s Sara Anzanello and Belarusian Aksana Kovalchuk.

“It was a good and easy match for us but I think and hope that both teams will display their best Volleyball when it comes to the final four of the Champions League” says Rabita BAKU and Serbian-born opposite Sanja Starovic.

Belgium: Volleyball fever spreading around in Maaseik for a sold-out house

Germany: Reserves leave their mark for UNTERHACHING in last round of Bundesliga

Players, can you repeat this defensive move?...