GER M: Robert Kromm to play for BERLIN Recycling Volleys in the season 2013/14

In the midst of the national Playoff series, gearing up for the quarter final’s second round of action BERLIN Recycling have taken another major step towards the up-coming campaign as they renewed the contract with wing-spiker Robert Kromm for the 2013/2014 season. 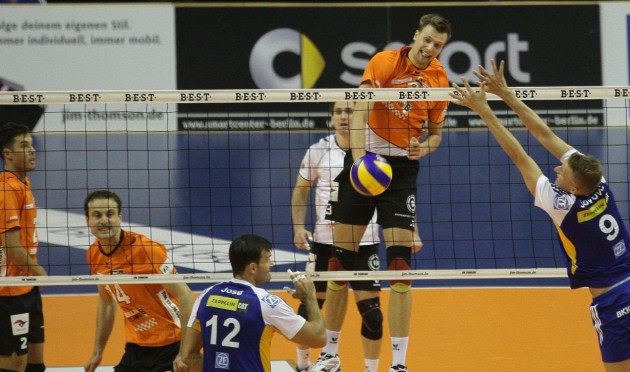 Returned to Germany’s Bundesliga (DVL) prior to the start of this year’s campaign after commitments in Italy and Russia, the well-known member of the German national team could celebrate a successful comeback in BERLIN – where he started out his career as professional volleyball player – as he substantially contributed to the team’s so far exceptional performance in the national championship as well as in the 2013 CEV Volleyball Champions League.

Club president Kaweh Niroomand is pleased about the extension of the contract with the 212 cm tall born in Schwerin: “I’m very glad we could agree on continuing our co-operation. Robert has played a respectable season so far and could claim many important points for us“, Niroomand said, adding: “Due to his calm nature he is a role model for the young players. As we aim at establishing ourselves as international top club, Robert may play a major role.“

Robert Kromm, who definitely belongs to the outstanding personalities in Germany’s first division, is also happy to continue playing for BERLIN Recycling Volleys: “Here in Berlin I have ideal conditions to play Volleyball. Moreover, my family and I feel at ease in the city.” Being on the team’s mission title defence, the current Bundesliga top scorer (341 points) does not think much about the up-coming season: “We are right in the midst of the Playoffs and have an ambitious goal.” Having scored a straight 3:0 win (25-21, 25-20, and 25-14) in the first round of action in the DVL quarter final against VC DRESDEN, BERLIN Recycling Volleys are currently gearing up for the second match of the Playoff series (played with the format best of three) this Sunday.