Cuba beat Chile in consecutive frames to collect its second triumph in Pool B of the U-20 Women’s Pan American Cup on Tuesday. Cuba will battle with Puerto Rico in a clash on Wednesday to decide who gets the ticket to the World Championship in Brno, Czech Republic. Sulian Matienzo, Yaremis Mendaro and Catalina Melo were the top scorers. Tomas Fernandez, Hugo Jauregui, Marilín Pagés and Josefa Schuler commented the game. 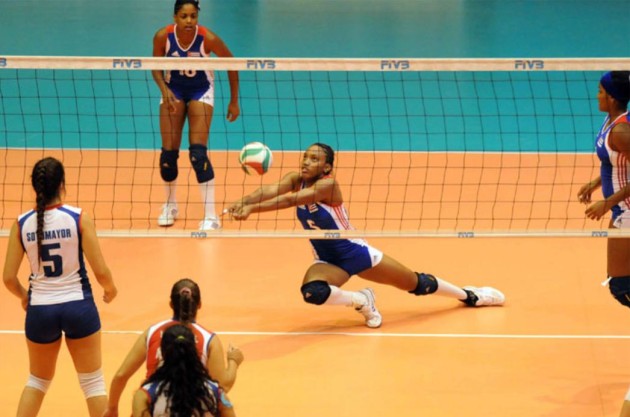 The victory sent to Cuba to a battle with Puerto Rico in a clash on Wednesday to decide who gets the ticket to the World Championship in Brno, Czech Republic.

Despite their failures in the serves, the winners could score with 10 aces and totaled eight blocks against the weak team of Costa Rica.

Cuban Sulian Matienzo was the top scorer with 16, supported by Yaremis Mendaro, who had 14. Catalina Melo was the best Costa Rica with 11.

Tomas Fernandez coach of the winners said he is optimistic and always confident about the eventual victory of his girls. “I did not think we’d win in three sets because I know the work of his coach and the ability of their girls in a very safe game down the middle.”

The Chilean leader Hugo Jauregui, meanwhile said he is satisfied despite the loss. “But I am glad we were in the game for very long time,” he said.

Marilín Pagés, the Cuban captain, praised her rivals. “They dominate the ball well and know to place the balls in the gaps.“

Meanwhile, the Chilean captain, Josefa Schuler, said: “We started well, but we missed more the desire to win and Cuba also played a super match, they overcame us  three times, so we must train more.“

GER M: Robert Kromm to play for BERLIN Recycling Volleys in the season 2013/14

5 Volleyball National Teams in Europe With The...