After two rounds of action were completed in the Playoff quarterfinals of the Bundesliga, BERLIN Recycling Volleys and the other top ranked teams of the regular season: Generali UNTERHACHING, VfB FRIEDRICHSHAFEN and TV Ingersoll BÜHL will battle to reach the final and represent Germany in next year’s CEV Volleyball Champions League. This and other volleyball news read on Worldofvolley.com. 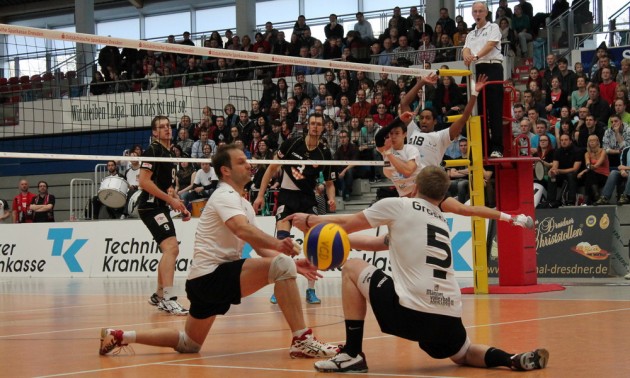 For the side of BERLIN it will be a clash with the only team that has edged the defending national champion this season.

Having scored a speedy 3:0 win (25-10, 25-22, and 25-10) in the quarterfinal’s second round of action against VC DRESDEN in the state of Saxony, the team of head coach Mark Lebedew has done a first step to accomplish their mission to retain last year’s title. Facing difficulties to find their rhythm in the first match, the side of BERLIN demonstrated its strength in the second round and made it to the playoff semi-finals of Germany’s Bundesliga. On Easter Saturday (7.30 pm) the playoff 12 participant of the 2013 CEV Volleyball Champions League plays at Max-Schmeling-Halle in Berlin the fourth ranked of the regular season, TV Ingersoll BÜHL, who has qualified for the round of the last four teams after two thrilling tie-breakers with MOERSER SC.

Mark Lebedew is aware of the up-coming challenge, remembering the 2:3 away defeat in this year’s campaign: “They outdid all teams in the second half of the season except for Generali UNTERHACHING and VfB FRIEDRICHSHAFEN and claimed rank four after the regular season even tied on points with FRIEDRICHSHAFEN”, the Australian says adding: “They have a balanced team roster with leading players as Joel Bruschweiler and setter Axel Jacobsen and have managed to integrate young talents as Adam White”. For the up-coming challenge this Saturday, the Berlin mentor remains nevertheless optimistic: “A self-confident opponent is always dangerous, but we are aware of our strengths and want our past defeat against BÜHL to remain the sole one.”

In the second semi-final Generali UNTERHACHING will clash with VfB FRIEDRICHSHAFEN. Semi-finals and the final will be played in a best-of-five series.

GER M: Opposite moves from Plusliga to...

GER M: Fear of the Berlin