GP: Marichev – “We hope that we will win all three matches”

Russian head coach Iuriy Marichev has his sights firmly set on his team to make a clean sweep in Pool L of the FIVB Volleyball World Grand Prix to ensure their chances of making the cut for the finals in Sapporo, Japan from August 28 to September 1. 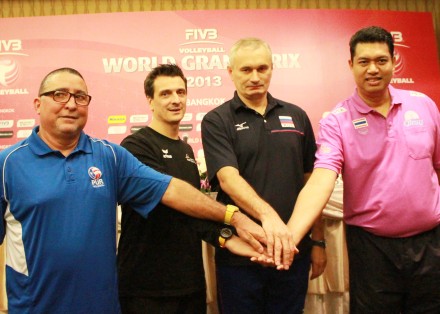 The team briefing and team interview took place Thursday afternoon at the Golden Tulip Sovereign Hotel, with the participation of the coaches from Germany, Russia, Puerto Rico and Thailand. A large number of Thai journalists took part in the interview session.

Russian coach Iuyriy Marichev: It’s my first year to coach the Russian women’s national team and it’s also my first time to visit Thailand. I think we have a tough draw here in Pool L, but I hope that my team will win all three matches to enhance our chances of qualifying to the finals in Sapporo.

Giovanni Guidetti coach of Germany: I think we have a tough draw here. For us, we hope to come get better. Every week, we just try to improve our games.

Rafael Olazagasti coach of Puerto Rico: After losing all matches in the first two weeks, we hope that we will get better luck this time.

Thailand`s coach Kiattipong Radchatagriengkai: We had tough draws in this year’s World Grand Prix. We challenged much stronger teams such as Japan, Turkey, Italy and Russia in our Pool matches, while we had trained together only for a few weeks ahead of the World Grand Prix. Although we have called for young talents to strengthen the team, their experience and performances could not yet catch up with the senior players. I’m a bit disappointed that my team could not make the cut for the finals this year. However, we will try our best in our remaining three matches at home. With a large crowd of Thai fans expected in the competition venue, I strongly believe that my players will do their best even though it is not easy to beat each team.