GER M: Friedrichshafen: No fear, but with respect

Next highlight of the Champions League follows on Saturday (February 11, 19.30h), the guests VfB Friedrichshafen meet with Berlin Recycling Volleys. The encounter is a classic of the volleyball league, the new edition of the Cup finalists of the last season and this season the duel between the second-and third team on the scoreboard. 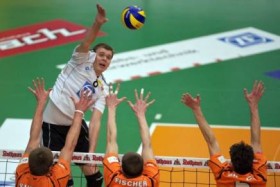 Just a day after returning from the match in Champions League in Tours (France) the players of Friedrichshafen are already on the road again.

On Friday evening, the team was at the airport from Friedrichshafen to Berlin, where on Saturday (February 11, 19.30h) in the Max-Schmeling-Halle, they will play the game against Berlin Recycling Volleys, the league-leading third team on the scoreboard in Bundesliga.

“We are not afraid of Berlin, but with respect,” says the coach of VfB  Stelian Moculescu.

“I think we have to keep ourselves warm there – and not just because of the temperatures outside.”

Namely, VfB will defend the second place, while preserving the theoretical chance of still taking the first one.

On the other hand, it is still possible for Berlin to win in the game and displace the opponent Friedrichshafen and take the second place.