With the victory of 3:0 against Netzhoppers KW- Bestensee, Berlin Recycling Volleys started well on Saturday night in play-off quarterfinals. 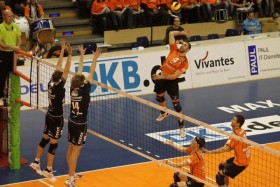 The return game will be played tomorrow evening in Landkost – Arena (14 March, 19:00h)  that is known as “Brandenburg hell“, while the third decisive game would take place on Saturday (March 17) in Berlin.

After the good performance in the first quarterfinal game, the coach of BR Volleys Mark Lebedev comments: “In the first match, we have shown a very solid performance. Almost every one of our regular players scored 10-13 points. This shows that the whole team was very good.”

Netzhoppers are very modest before the return match on Wednesday: “We are for the last time in Brandenburg hell and will enjoy every point“, said the coach Mirko Culic.

The last encounter between the two clubs will be on 18 February and probably the last Brandenburg – Berlin derby in the season 2011/12.

ITA A1: Verona is full of initiatives!