After moving to Berlin only some months ago, Serbian middle-blocker Srecko Lisinac has already evolved into one of the most important players for the BERLIN Recycling Volleys. In the following interview the young talent whose team has just suffered a bitter home defeat against Zenit KAZAN in the first round of action in the Playoffs 12 of the 2014 CEV DenizBank Volleyball Champions League talks about his new home city, his first experiences in Europe’s elite club competition and his goals for this year’s campaign.` 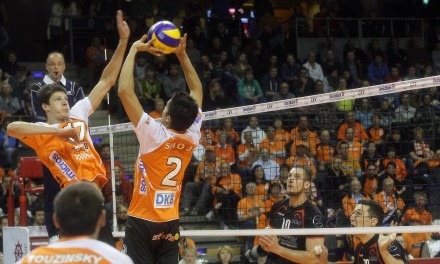 Srecko, which impressions can you take from your first months here in Berlin and what is your opinion about the club?
“Being on the road with the Serbian national team during the club’s preparations for this season I’ve had not much time to settle into the team. We immediately jumped into the season. But the guys gave me a superb welcome, took me around the city and they really helped me get accustomed in Berlin – the group is just great. This big city has kind of overstrained me at the very beginning, but now I really have the feeling to have settled in.”

You’ve played several home matches at the Max-Schmeling-Halle so far. What do you think about the atmosphere at the arena?
“The atmosphere is great. It’s really nice to see so many people attending our matches and supporting us, even when our play does not run smoothly.”

Against Zenit KAZAN you suffered a bitter defeat, but prior to this game you won eleven matches in a row. What do you think is the reason why you’ve been playing that successfully?
“In my opinion we’ve been performing so well first because of the fantastic atmosphere in the team and the great team spirit we experience. It is not only the team itself, also the people around the group such as the management or the medical department who are giving everything to support us the best possible way – all the organization here is really professional. And that’s what enables us to practice and play well. What’s more, we are well-staffed on all positions with strong and professional players.”

Do you see any chances for you to turn the tables in the re-match against KAZAN on Tuesday? What are the experiences you’ve made in your first Champions League season?
“I do believe that we stand a chance in the re-match, even though it’s going to be really tough. Concerning my experiences, I think as a player you further develop when playing teams such as TRENTINO, IZMIR and LUGANO. I’m really happy to have the opportunity to play such strong opponents in this competition.”

And what are your personal goals in this season?
“In such a team like BERLIN you have to aim high. I think, you should always be positive and not be content with less than the first rank and just fight for it.”

Four Ways to Blast Your Traps