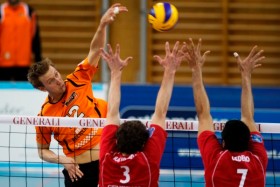 In front od 1500 viitors in sold-out Generali Haching Sport Arena both teams delivered a thrilling duel at high level with the happier end for the Bavarians. The fourth final of the “best of five” series will take place on Tuesday (kick-off 19:30 clock) held in Berlin’s Max-Schmeling-Halle.

“It was a beautiful game, finally, after two 3-0 results, a dignified finale for the German championship. The team has struggled, everyone wanted to win. It was a remarkable team effort, “coach Mihai  Paduretu of Generali Haching summed up after the game

BR Volleys Coach Mark Lebedev confirmed the judgment of his colleagues: “There was a strong play from both teams on a level as I have not seen in the league long time ago. At the end Haching made points in crucial situations. “