Zdar nad Sazavou, Czech Republic, April 14, 2012. Spain is very close to advance to the final round of the 2012 CEV Junior Volleyball European Championship – Men after scoring a 3:1 win over the hosts of the Czech Republic in the fourth day of action at the second-round qualifier in Zdar nad Sazavou. 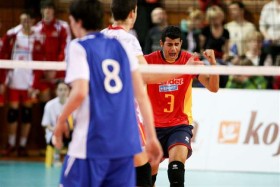 On Sunday the silver medalists from the 2011 FIVB Youth World Champs need to edge Romania – which is ranked at the bottom of the tables – to book a ticket to Gdynia and Randers, i.e. the venues of the Championship that will be co-hosted in late August by Poland and Denmark.

Slovenia opened the program on Saturday in Zdar nad Sazavou by edging Romania 3:1 (25-23, 27-25, 12-25, and 25-23). With this result Slovenia has moved up to third in the standings and is close to book a spot for the third-round qualifiers that are scheduled for mid July.

Slovenia imposed its play in the opening set even though it was quite balanced by scoring the key rallies to seal it at 25-23 and eventually moved up 2:0 after Romania missed four set balls in set 2. While Romania clearly dominated the scene in the third set, Slovenia got back on track in set 4 to take maximum points from this game, with Domen Kotnik top scoring with 22 points.

“We lost the game even before the start, but mainly in our heads. We have a young group and we shall be able to improve in the next years even though I do regret these four set balls we missed there at the end of the second set” said Romanian mentor Valentin Grigorie.

“It was a very tough match especially as the players are getting tired; we had played 14 sets in three days before going into this match so they felt this not only physically but also mentally. We still have to fight to finish among the top three of the group” said Slovenia’s mentor Samo Miklavc.

If they want to make it to the third qualification round, the Czechs need to score a win on Sunday while playing France, i.e. the 2011 youth European vice-champion. The Czechs played without their regular opposite Michal Finger who was replaced by Matej Uchytil while Marek Zmrhal joined the actions for the first time in the tournament.

The score was very close in the opening set with the Czechs having even a margin of two but Spain’s star Andres J. Villena scored the deciding points to seal it at 25-23. The Czechs quickly trailed 2:7 in the second set and their many mistakes could not help reduce that gap (6:15). The home heroes were trailing by 4 at the second technical time-out after four points contributed by Uchytil but still the final section of the set fully belonged to the Spaniards (18-25). The Czechs fought bravely to claim set 3 to the delight of a sold-out house in Zdar nad Sazavou but Spain opened the fourth set with a massive 6:2 to widen the gap (16:8) and comfortably cruise to the final 25-13 and 3:1.

“The Spaniards claimed this match mainly because of their experience” said home coach Petr Juda.

“We went up in set 1 and 3 but they regularly scored the key rallies. Our opposite Uchytil did not disappoint at all even though this was his first game in this position and so we are confident that we can fight for the victory on Sunday as we take on France”.

“We can be happy with today’s performance as we played our best after our disappointing result against Slovenia” stressed home captain Adam Zajicek.

“We made a huge leap forward to the final round of the Championship. The Czechs played well but I am happy with the win and my personal performance” stated Spanish star Andres Villena.

Later in the evening France beat Estonia 3:1 (25-21, 25-21, 18-25, 25-17) to remain in second place and with a win on Sunday against the Czechs the 2011 youth European silver medalists will surely advance to the next stage of the qualification process. Estonia was anchored by its stellar opposite Karlis Mesila who scored 14 points but still could not stop the march of the French guys.

“I am very proud of my team as after yesterday’s defeat to Spain we had to mobilize all of our forces to go for a positive result. To make it to the final round we have to beat the Czechs on Sunday and hope that Romania can cause a surprise by edging Spain” concluded France’s mentor Jean-Manuel Leprovost.