Mogilev, Belarus, April 14, 2012. Poland booked on Saturday a spot for the final round of the 2012 CEV Junior Volleyball European Championship – Women with one round still to go before the end of the qualifying tournament that is currently running in Mogilev after the young girls mentored by Andrzej Pec edged Germany in the real highlight of the day. 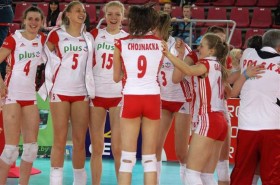 Poland joins the hosts of Turkey plus the medalists from the 2010 edition, i.e. Italy, Serbia and the Czech Republic, for the Championship that is scheduled for mid August in Ankara

The key factor that determined the final outcome of the game was Poland’s solid performance in attack while Germany could not find a way to impose its play. Carina Aulenbrock and Liza Izquierdo played an excellent game for Germany helping their side come back from two sets down but Poland eventually had the upper hand at the tie-break.

“We knew the importance of this game especially after Germany had finished fourth and fifth at last year’s Youth European and World Championships. This is a very strong opponent and to claim this game we needed to play our best. Now we can start preparing for a very hot summer” stated Poland’s head coach Andrzej Pec after this win.

It was a very special day also for the young girls from Lithuania who edged their neighbors of Latvia for the first time in history doing so after losing the opening set (18-25, 26-24, 25-15, and 25-10). Volleyball is traditionally more popular in Latvia than in Lithuania, so this win is very valuable for the group from Vilnius. After Latvia had claimed the first set the match had turned into an uphill climb for Lithuania but after taking a very close final rush of the second set, the girls around Jolita Kontvainiene stepped up to dominate the game in set 3 and 4.

The match may be subdivided into two sections as France imposed their play in set 1 and 2 especially via Elisabeth Fedele and her great spikes. Afterwards everything changed in set 3 with Nina Rabatsiahava playing her best match of the tournament and helping her leader Volha Lazitskaya call for the tie-break.

This unfortunately turned into a real debacle for the home side that started with a positive 3:0 but then committed many silly errors to pave the way with gold for the group coached by Jacques Beraud.

“We lost because of our own stupid mistakes, we shall simply forget this game and move on” said home mentor Mikhail Kovalenko.

“I am proud of my girls because they displayed some character in the fifth set and could eventually win a very difficult game” singled out a happy Beraud.