Bardejov, Slovakia, April 14, 2012. Slovakia, Bulgaria and Austria will fight on Sunday for a ticket to advance directly to the final round of the 2012 CEV Junior Volleyball European Championship – Women. 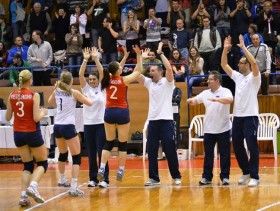 Three teams to fight for European pass in Bardejov

All three teams have nine points before the last day of the second-round qualifier that is currently taking place in Bardejov, eastern Slovakia. The last match on schedule starring the home heroines of Slovakia (pictured) and the real sensation of the group, i.e. Austria, is very much likely to determine the final standings and hence great emotions are guaranteed up to the very last rally.

Bulgaria lived up to the expectations by downing Azerbaijan in the first match of the day with a clear score line (25-20, 25-19, and 25-19). Bulgaria pressured a lot with its service while the girls of Azerbaijan showed some deficiency in reception thereby paving the way for the final 25-20 in favor of the players from the Balkans.

The second set followed a similar plot and Bulgaria claimed this period with the score of 25-19. Azerbaijan started playing better in the third set and went up 7:4 and later on 15:11. However, Bulgaria didn’t want to lose a set in this match and turned the score around at 18:16 finally going for a speedy 25-19 to take three points from this game.

“We are happy that we won in straight sets. It was not as easy as it looked. Azerbaijan fought back after the first two sets and it was not easy to stand it. On Sunday we will play against Switzerland and we will do our best to take a ticket to the final round of the European Championship” said the head coach of team Bulgaria Radoslav Bakardzhiev.

Slovakia started very well pushing their opponents with a good service and defended well, seizing the opening set with the score of 25-19 to the delight of an amazing audience. The Netherlands started better in the second set, made fewer mistakes and moved up 12:8. However, the Slovakian players stayed calm and leveled the score at 19 before seizing it with relative ease at 25-23. That good momentum was extended also to the third set with Slovakia eventually wrapping it up with a 3:0 (25-16).

“We spoke with our players after yesterday’s defeat to Bulgaria and wanted to keep them calm. We knew this game was going to be very important for the final standings of the group. I think the key for our victory was our good service, being hence able to control their attackers. I think we have taken a lot of experience from our participation in the Youth European and World Championships as we got used to play strong sides like the Netherlands. The situation in our group is interesting and everything will be decided on the last day” stated the head coach of team Slovakia Eva Kosekova.

Austria went up 24:21 in the first set, but the Swiss players turned the score around (26-24) thanks to the great service provided by their best player Elena Steinemann. Austria was better in the second set and deservedly claimed it with a relatively easy 25-18.

The third set was very important. Austria went up there 16:12, but the Swiss players did not give up and leveled the score at 21. Some tension was to be felt in the sports hall but Austria kept cool to score the most important rallies and go for the provisional 2:1 (25-22). On the other hand, the Swiss girls could not regroup and easily lost the fourth set with the massive score of 25-13.

“We knew that this was going to be a very though game. Our players were a little bit nervous in the first two sets and we didn’t play as good as we had done yesterday. But from the third set they got rid of their nervousness, we played better in service, more aggressive and it was good. We will play tomorrow against Slovakia, we know each other very well and it will be an interesting game. I am looking forward to it” said the head coach of team Austria Li Qing.

“Both teams deserved to win. We had some difficult moments as we couldn’t always adjust our attacks. We have to go back to practice and to work more. We are out of the tournament, and this makes us disappointed because we did not want just to participate but to move at least to the next round of the qualification process” concluded Switzerland’s head coach Florian Steingruber.