Kharkiv, Ukraine, April 15, 2012. With still one day to go for completion of the European qualifier that is being hosted by “Lokomotiv” Sports Palace in Kharkiv, the young guys from Belgium have already booked their ticket to the final round of the Championship slated for late August in Poland and Denmark. 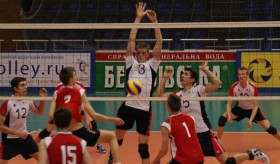 On Saturday the group mentored by head coach Emile Rousseaux downed Hungary in straight sets (25-12, 25-11, and 25-13) and in only 56 minutes of play to assert their supremacy in the group.

Regardless of the result stemming from their last match with Israel on Sunday, the Belgians will anyway finish first in the Pool thereby joining the hosting countries as well as the medalists from 2010 (Russia, Bulgaria and Serbia) for the much awaited event whose finals will be played in Gdynia.

Saturday’s program was opened by another speedy win, this time claimed by Israel that routed their opponents from Croatia also in three straight sets (25-14, 25-18, and 25-22). With this result the young guys from Tel Aviv confirmed they are the real surprise of the group and with a positive outcome of their last game with Belgium they may still advance to the third qualification round that is set for mid July.

To round out the day the hosts of Ukraine once again disappointed their fans by losing, this time at the tie-break, to the Netherlands. It was somehow a remake of their previous game with Belgium, with Ukraine claiming the opening set 25-21 and leading almost all the way through also in set 2 before the final rush turned into a real drama that was sealed by the young “Oranjes” with the amazing score of 32-34.

The Netherlands easily disposed of the hosts in set 3 (25-13) and finally the home heroes realized they were going to concede three points to their opponents, so they did step up and called for the tie-break (25-23). The Ukrainian guys looked very nervous there and they trailed 9:14 before coming back to almost level the count, but this was ultimately not the case as the Dutch side scored two more rallies to finish it off at 15-13. With this result Ukraine is ranked third in the group with the Netherlands second and hence both teams are still on a good track to advance to the third-round qualifiers coming up in July (venues to be determined).

VEN W: Veronica Gomez has passed away in her country