The city of Oldenburg is about to host an exciting Volleyball weekend where the women’s national teams of Germany and Poland will be battling for first place in Pool B of the 2014 CEV Volleyball European League. 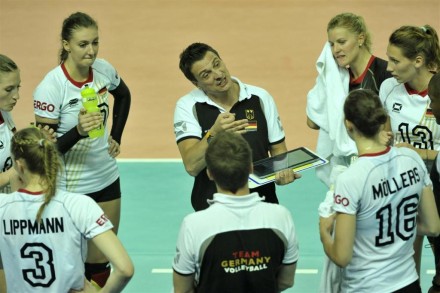 Giovanni at time out

These teams currently share the top position of the standing with 14 points each and by adding another two victories to their respective record they would definitely cement their leadership in the group.

Germany’s head coach Giovanni Guidetti just disclosed the names of the 12 players that he will rely on for the coming weekend, and in the end it was young opposite Carina Aulenbrock not to make the cut for the matches taking place at the EWE-Arena.

“We always play to win but at this stage it is even more important to develop our young players with an eye on the World Championship coming up later this year in Italy,” Guidetti says.

Setter Mareen Apitz who had taken a break from the national team after the first leg played in Stuttgart some weeks ago – will be back in action for the matches in Oldenburg.
Germany and Poland already played each other last week in Plock and eventually ended up cashing one victory and one loss apiece.

“The matches in Poland were okay,” Guidetti stresses.

“We played a good first match where Poland performed really badly. Only one day later it was the other way around, with my team showing a very poor performance, and having problems in side-out and blocking. However, I was nevertheless pretty satisfied with the performance showed by our young players Louisa Lippmann and Lena Stigrot. They played very good,” Guidetti adds.

If Germany wins these matches, they will make a huge step forward on their way to a second consecutive European League final where they would play home and away matches with the side topping the tables in Pool A.

The German team for the matches in Oldenburg includes the following players: