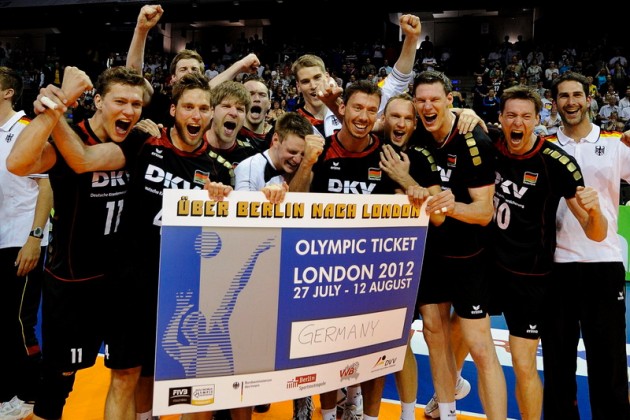 Unbeaten in three matches, hosts Germany topped the tournament with a win:loss ratio of 3:0 ahead of Cuba who finished second with a 2:1 record, the Czech Republic (1:2) in third and India (0:3 in fourth).

Germany v Czech Republic
Hosts Germany overpowered the Czech Republic 3-1 (25-22, 25-23, 25-22, 25-21) to book an Olympic ticket to London 2012. Coming off a stunning five-set comeback win against Cuba on Saturday, Germany followed it up with a tough four-setter against struggling Czech Republic in the last match of the tournament.

For Germany, it was their fifth victory in 11 matches in FIVB competitions against the Czech Republic. Leading the way for Germany once more was György Grozer with 28 points, while Jan Stokr registered 19 points for the Czechs.

“It was the toughest day of the tournament,” German coach Vital Heynen said. “We needed the win while the Czech Republic didn´t mind about winning or not winning. It wasn’t a very good game. We didn´t show our full potential but it was enough. We didn´t prove ourselves by playing nice volleyball but by working hard.”

Cuba v India
World No. 5 Cuba rebounded from a second-day loss to Germany with a straight-sets (25-12, 25-22, 25-20) win over India, keeping their Olympic Games qualifying chances alive for a few hours as they awaited the result of the following match between Germany and the Czech Republic before Germany deprived them of their dreams.

Cuba’s Rolando Cepeda led all scorers with 23 points while captain Singh Gurinder was the best for India with 11 points.  It was the first match ever between Cuba and India.

“I’m not happy because we probably won´t qualify for the Olympic Games,” Cuba coach Orlando Samuels said. “It was hard to play after the defeat against Germany yesterday. I think there has been only one crucial game during this tournament.”

India coach G.E. Sridharan was happy with his team’s improving performance from one match to another. “I’m happy for my team´s performance today, it was better than the last two days. Cuba is a very high level team and we learned much by playing against them. Best wishes to the team which is going to the Olympic Games.”