Schwerin, Germany, January 2, 2012. After claiming the semifinal against VC WIESBADEN played last Saturday night, Germany’s champion SCHWERINER SC qualified for the final of the national cup scheduled for next March 4 to play there Rote Raben VILSBIBURG. 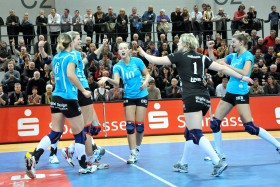 SCHWERINER SC makes it to final act of German Cup

The final of the national cup is one of the greatest Volleyball events in Germany as it is played in front of 10’000 spectators in the splendid scenario provided by the “Gerry-Weber-Stadion” in Halle/Westfalen.

Every year Volleyball fans from all over Germany are joining this highlight where the men’s and women’s crowns are at stake.

After being dropped out by Smart Allianz STUTTGART very early in last year’s competition, this time the team of Dutch head coach Teun Buijs was lucky with the draw as SCHWERINER SC had three home matches to play.

The last match of the year 2011 was supposed to be the most important of the current season.

Being ranked fourth in the national league behind Rote Raben VILSBIBURG, DRESDNER SC and USC MÜNSTER the cup’s semifinal against VC WIESBADEN was an all-or-nothing mission for SCHWERINER SC and the players did well: in just 79 minutes they won the game with a clear 3:0 (25-22, 25-19, 25-22).

More than 1’800 people – this season’s record for the Arena in Schwerin – pushed the team to the final where it will play Rote Raben VILSBIBURG that won the second semifinal against last year’s Cup winner Smart Allianz STUTTGART 3:1 (22-25,  25-16, 25-22, 25-16) and hence celebrated a happy and successful end of the year.

For captain Julia Retzlaff and her team mates there was not much time to celebrate because physical trainer Michael Döring was waiting the next day with light weight training.

Due to the tight schedule of the Bundesliga there wasn’t really time to celebrate the New Year’s Eve.

After training at 9 am the first of January the team hit off to Leverkusen for tonight’s match against TSV Bayer 04 LEVERKUSEN.

In total there are 9 matches coming up this month for SCHWERINER SC.

Turkey: Volleyball is on top of the podium in Turkey

YEC F: Come from behind win for...