Beograd, Serbia, January 2, 2011. The Volleyball Federation of Serbia and its official marketing partner, “Crvena Zvezda Marketing”, were recently presented with the “Marketing event of the year” award for the innovative promotional actions that were implemented in combination with the 2011 CEV Volleyball European Championship – Women that ran this past fall in Serbia and Italy. 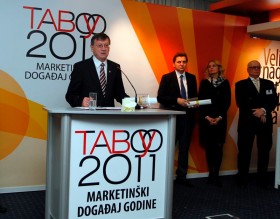 Volleyball European Champs awarded as marketing event of the year

The award was received by Aleksandar Boricic, VFS President and CEV Senior Vice President, and Zoran Avramovic, VFS Marketing Director and General Manager of the “Crvena Zvezda Marketing” agency, who developed the concept of the project named “Volleyball connects”.

Mr. Boricic and Mr. Avramovic attended the fifth annual gala organized by the magazine “Taboo” held in the premises of the Ceremonial Hall of Beograd’s fair.

The gala is yearly awarding agencies and companies that provide marketing services and consultancy in Serbia.

The award was presented to Mr. Boricic by Aleksandra Drecun, General Manager of the Center for Science Promotion created by the Serbian government, and Mr. Žozef-Ivan Lončar, founder and owner of the magazine “Taboo”.