Beograd, Serbia, January 2, 2012. Serbia’s Volleyball national teams were proclaimed the country’s best brand of the year with the award being presented to Uros Kovacevic and Ana Lazarevic during the twelfth edition of a special gala that took place this past December 24 at “Sava” Congress Center in Beograd. 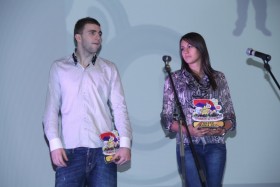 Volleyball national teams are Serbia’s brand of the year

Vladimir Grbic, Vice President of the Volleyball Federation of Serbia and former Olympic champion, was also in attendance after being named official ambassador of the event.

Kovacevic and Lazarevic, members of the teams that were crowned European champions in 2011, received their respective prizes by Mrs. Snezana Samardzic-Markovic, Serbia’s Minister of Youth

CAVB: Cameroon up and running after crushing...