At the time of making the balance of the grass-root Argentine light blue - white jersey boys and men teams, no doubt the most important achievement was the historical silver medal won by the Men's Junior Team at their World Championship obtained in Brazil but doubtless the year 2011 was very positive for the three youngest Argentine teams. 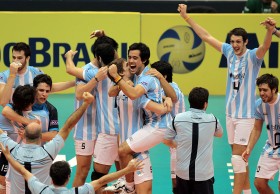 The new Boys U-Youth Team, participating of their first South American Championship, also obtained a silver medal while the Youth Team, playing their first World Championship obtained a deserving fifth place that put the teams on the second FIVB World ranking place with 246 points – just 6 points behind the best team of the World, Serbia with 252.
The preparation of the Junior Team coached by Juan Cichello, included a friendly tour in Brazil and the participation of the team at the Men’s Senior Pan-American Cup in Canada and two four-team competitions in Villa María, Córdoba, where Argentina welcomed very strong world teams as USA, Russia, Canada and Germany.

With all these preparations, done with a great effort thanks to the Argentine Volleyball Federation, the light blue – white jersey team dream flew to Brazil last August.

After a hard debut against Puerto Rico, Argentina kept growing finishing the first round in Niterói undefeated v Puerto Rico, Tunisia and Spain.

Then, in Rio, at the smashing Maracanazinho, the team overcame India and won the “classical” South American match v the host team of Brazil to win a total of five consecutive matches qualifying for semi-finals.

Serbia overcame Argentina at the last match of the second round but Argentina was already among the best four teams of the world.

The Semi-final match against USA, one of the rivals of the four-team competition in Villa María sounded very hard due to the good USA output and the anxiety on the Argentine team – they had never reached a final World Championship match but anyhow, with a great team performance they broke all the records and for the first time they stood fighting for the Gold medal.

There, at the final match Russia overcame Argentina in an exciting and dazzling tie-breaker match showing that both teams deserved to fight for the title.

Some days later, the Boys’ Youth Team started its World Championship at home, after participating as every year at the Argentine ACLAV A2 Seniors’ upgrading Men League added to international friendly tours in Brazil and Italy and matches in both world venues, in Almirante Brown and Bahía Blanca and in Chivilcoy in a very hard four-team competition against Cuba, France and Spain.

Their World Championship for the light blue – white team started in Almirante Brown site losing against Bulgaria in a tie-breaker but then, they overcame Egypt and USA to move to Bahía Blanca for the second round.

No doubt, Argentina found itself playing in the hardest pool, due to Bulgaria last match in the first round.

They were defeated first by the later Champion, Bulgaria, then overcame China and finished with a defeat against Cuba that put the team on the fight for the fifth place.

Only one more set won would have changed their path putting them among the best four teams of the World.

But they recovered and finished showing forcefulness in the last matches with two 3-0 over Greece and Bulgaria (the perfect revenge of their first clash) to put the team on the fifth place without any doubt. Even though the team did not finish at the top group they kept adding points to add points at the FIVB Ranking.

To close an outstanding year, in November, took place the first South American U-Youth Championship where the light blue – white jersey obtained in a very levelled competition among all the teams, in Ecuador, a runner-up place and the silver medal playing great matches against Brazil, Chile and Venezuela (the strongest teams).

The best two teams, Argentina and Brazil fought for the title in a tie breaker with Argentina standing 1-0 and 2-1 before Brazil obtained the Championship.

The 2011 therefore is a great positive balance, another year of growing with outstanding results and a new year that starts with great dreams and effort to keep improving and being every day a little bit better.