Making a balance up to the most non-important fact, the coach of all Argentine feminine teams, Horacio Bastit recognized that it was an historical 2011 due to all teams' performances. 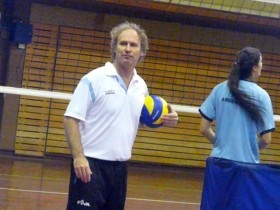 The first participation of an Argentine light – blue team at the FIVB Grand Prix (knowing already they qualified for the 2012 event, too), the return of the team to the World Cup and the participation of the Girls’ Youth Team at their World Championship, the upgrading at the FIVB World Ranking, the South American Championship and the improvement of all teams at international best levels is all the result of the outstanding work done by the coach.

– What was the best for the Senior Team during the year?

– No doubt the result obtained at their South American Championship in Peru that confirmed the improvement of the team even against our great rival Perú in an unquestionable 3-0 match that put it on the third place of the continent. We already had overcome it at the Pan-American Cup in Mexico, where in that match the qualification for the 2012 FIVB Grand Prix was at stake.

– What is their future goal?

– Luckily I see that the senior team can keep growing in an immediate future and that the U-Youth, Youth and Junior teams have a promising future and therefore all Argentine feminine volleyball is growing steadily. This is the result of the youth and talent of all players that showed during the year that just ended a team with all players having an average of 23 years old and the the quality and quantity of international competitions they partipate including the Pan-American Cup, the 2011 and now the 2012 Grand Prix, the 2011 World Cup and the South American Championships. To be able to compete in the world with a young talented team will allow us to keep growing steadily.

– With reference to our Argentine Volleyball all keeps growing, mainly the Senior team but the Junior and Youth team participation at the ACLAV Argentine A1 League, the qualification and then the result (among the best eight teams of the World) of the Girls Youth Team in Turkey and the participation of the U-Youth team in their first South American Championship in Uruguay and the growth of the work done all over the country finding in working dates and concentrations new talented players including the continuous connections with coaches of all Argentine regions show my beliefs. This last item allows us to have contact with players, clubs and coaches even two years prior to ending the expansion plan with a great advantage.

– What is your plan with Brazil becoming a rival at the Olympic Qualification Competition?

– To start we have to face this period thinking we can overcome it. It will be a very hard competition as some of the rivals are very strong but this will allow us to keep adding experience and international competitions. We have to believe that we can overcome the strong Brazil, Colombia and Peru teams. Colombia and Peru are strong but we have overcome them but Brazil is different. We have to understand that even they are the Olympic Champions, just losing a single set in Beijing, they are not in their be moment. Matches, as in all sports, are won in the field so we have to believe in ourselves when we face them.

– Our master plan is called for the year 2008 at the National Sport Secretariat and at the Argentine Volleyball Federation “THE OLYMPIC DREAM” and we have already among our goals to qualify for the 2012 London Olympic Games. We have dreamt on this for the last four years and now we have to be even more stronger than ever.

– We believed that the best team of the world, Brazil would qualify for the games at the World cup and that would allow us to fight against Peru and Colombia for the South American berth but things have changed and now we are four strong teams fighting for one ticket. Therefore we keep fighting and believing we can achieve it, it is not the moment to keep fighting.

– What was the best moment of the year? – No doubt the victory over Cuba in a tie-breaker match at the second weekend of the Grand Prix in Zielona Gora, Poland when we were losing 2-1 and coming from behind and we won the fourth set and the fifth and definitive one. We can not forget that moment with the last three points won by Daniela Gildenberger.

– To keep working with the grass-root categories as we have the qualification championships for the Youth and Junior World Championships and we hope that the junior team can maintain their last South American result – when they were the youth team) and maybe, they even can improve their end result and that the new youth team qualifies again, putting both teams at their world championships.

– With the senior team we must get ready for the Pan-American Cup that will take place in Lima, Peru, that will qualify for the 2012 Grand Prix. We must keep growing and improving and as I said before give this very young average team the chances to compete in the best annual FIVB World Competition.

– To end, our main goal is to keep growing and making our feminine teams the best they can. Now the Senior team stands in the 18th place at the FIVB World Ranking and we are happy with that result but we look forward to improve it as the better we stand the most international competitions we will participate at. I must say that to see in the distance that we stood in the place 35 in the year 2008 when we started to work in the “Olympic Dream” is a great satisfaction.