Six years went by between the last two participations of the Argentine Girls' Youth Team to their FIVB World Championship and it deserves a balance as in the year 2011 the light blue - white jersey team could once more be part among the best teams of the World competing in Turkey with the goal of showing its great growth, something fulfilled satisfactory. 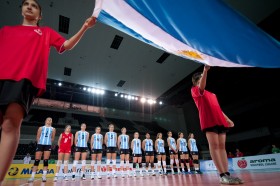 The path towards the World Championship started in the year 2010 in Peru when the team recovered the second place at their South American Championship playing against the host team in a terrific match with all the pressure of being the visiting team.

With the qualification for the World Championship under their arms, the first part of the year 2011 was dedicated to improve the utmost the team.

Therefore, the team, for the third time participated at the Argentine ACLAV A1 Women League, after the Junior team did the same during the season 2009/10.

Winning experience at the ACLAV Cup first and then at the League, as part of the best eight teams, the light blue – white jersey team played over 20 matches against experienced senior teams.

Mexico, during the year, was the perfect scenery for two great moments of the girls in their preparation.

With the work and effort of the Argentine Volleyball Federation, the team travelled twice to Mexico, returning in both cases home with the gold medal winning first the friendly Baja California Cup and the first edition of the Youth Pan-American Games for this category.

Mexico finished with the same points as Argentina on the first round of the World Championship but not only that, the fixture also leveled both team in the debut match.

Along its preparation, the parity was settled several times with tie-breaker matches but the debut in Turkey was the one dreamt by the Argentine girls coached by Guillermo Cáceres.

An unquestionable 3-0 that gave wings to their dream.

The second match v Slovakia brought a 2-0 record for the team after a terrific tie-breaker definition and the qualification for the second round.

The first goal was fulfilled: to maintain the prior World participation, when Argentina finished eight in Macao 2005.

Brazil won on the final match of the round but the team had improved its history.

Then, the team in Turkey faced the best teams of the world, China, Turkey (at the end second runner-up and champion) and Germany prevailed in the second round and the team, once more faced Brazil.

Making difference with their first match, Argentina showed the same level in a dazzling match that ended 3-2 for the South American Champion, Brazil but confirming Argentina among the best eight teams of the world, besides the victory v Japan in the closing match.

The following category came into the international field competition in their first historical South American Championship for U- Youth teams and even though three players Verasio, Piccolo and Rodríguez, very experienced players were part of the team, they made history winning in Uruguay the Bronze Medal behind Brazil and Peru after very levelled matches against both teams.