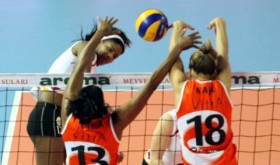 Galatasaray could not resist Eczacibasi Vitra

Oranges attacked so efficient in the first part 6:8, Galatasaray could not prevent reception errors 12:8, thus, Dragan Nesic called a time out.

After the break, home team equalized  score at 13, four reception mistake and a block helped them as they led the second mandatory stop 16:15.

There was an Eczacibasi storm in second set via Neslihan Darnel’s flying services 2:8, series continued with high blocks as Nesic asked for second time out 5:14.

Although Rosir Diaz Calderon tried to resist against Eczacibasi team work and Cimbom made some substitutions, set was going to guest staff 15:25.

Galatasaray was almost exhausted in third set, yellow red ladies neither had good reception nor well service 7:12, the team with short socks arrived second break 11:16, played in comfort remainder and got the last set 16:25, notched match 0:3.

Germany: Defeat at the end of the year

TUR M: They will be teammates again...