As they beat Greece 3:2 the boys from Belgium ultimately qualified for the final round of the 2013 CEV Youth Volleyball European Championship. Finland – via their 3:1 win over the hosts of Hungary – is very close to achieve this goal. 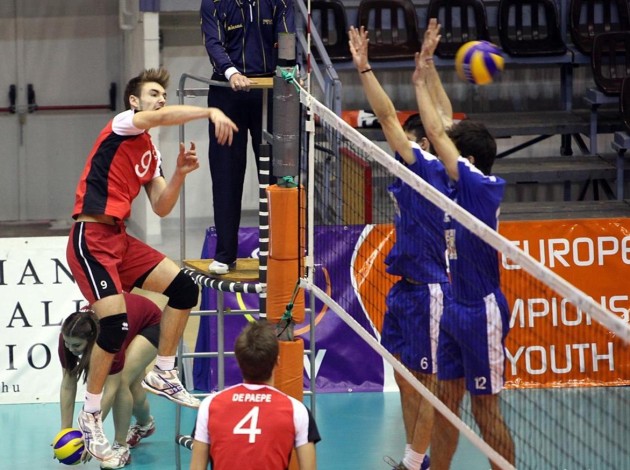 Croatia opened the program on Sunday by claiming their first win of the tournament cruising past Denmark with the score of 3:1 (25-14, 25-20, 23-25, and 25-20). After a close start (8:8), the Croats imposed their rule in the first set going for a massive 25-14. Anchored by their star Filip Sestan and by Marko Sedlacek, Croatia claimed also set 2 before Denmark got back on track in set 3 via some great play by Mads Molgaard – who eventually top scored in the game with 31 points. However, Croatia got back control of the operations in set 4 and after 101 minutes could celebrate a well-deserved 3:1 win.

In the second match of the day Finland started out strong to claim the first set (25-23) while playing the hosts of Hungary. Finland got to the front also in set 2 with good blocks and even though the final rush was extremely close, the “Suomis” could cash another 25-23 to go for the 2:0. Antti Ropponen was Finland’s best player in the match as he scored all of the most important points. However, Hungary responded in set 3 with Norbert Gebhardt on fire (25-17) but it was Ropponen – top scorer in the end with 28 points – who set the tone in the next section to finish it off at 3:1 for the guys from Finland.

Entering that match with a perfect record after three days, Belgium started out strong with Greece going up 1:0 (25-22) but then Greece reacted and could go for the 1:1. Laszlo Paepe and Arno Van de Velde paced Belgium in set three where the score was tight up to 17 all before Belgium finished it strong (25-18). Via the spikes killed by Georgios Tzioumakas and Vasileios Kostopoulos Greece got back on track in set 4 helped also by the blocks scored by Kyriakos Spyrounis to call for the tie-break (25-20). 15-year old Thomas Konings stood out there for Belgium and the 15-13 and 3:2 secured for this side a spot in the final round of the Championship.