France and Greece have scored four wins each in Volos and will hence fight for first place on Monday in what is the very last and deciding round of play of that qualifier. On Sunday France edged Spain 3:2 while Greece got past Finland 3:1 to stay unbeaten after four rounds of play. 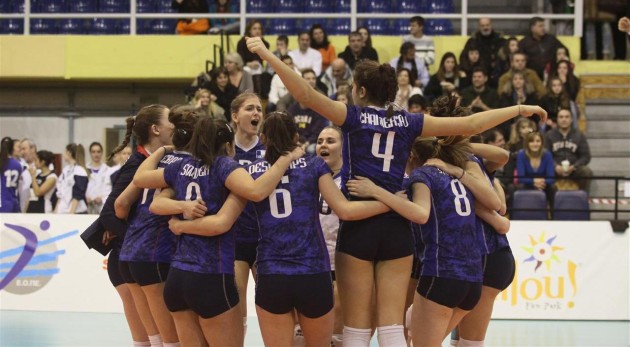 France’s girls are very close to qualify for the final round of the 2013 CEV Youth Volleyball European Championship after on Sunday they scored their fourth consecutive win in Volos, venue of Pool E. They did so at the end of a real thriller with Spain (3:2; 23-25, 22-25, 25-19, 25-14, and 18-16) where they came back from two sets down to make sure they will finish the tournament in first or second place. After suffering three consecutive defeats, Spain had nothing to lose and surprised France with a splendid start in the first two sets. Spain attacked and blocked with great efficiency but after that the “Bleues” started playing much better and could eventually call for the tie-break. There France got up 5:2, 12:9 and 14:10, but Spain fought its way back via an ace and some more good serves by Saray Manzano. After Spain leveled at 14, France dissipated two more opportunities to seize the win but did so with the next match ball that was cashed with an attack by Lucille Gicquel.

Greece emulated France by claiming its fourth win as well by coming back after losing the first set to Finland to score a 3:1 victory (15-25, 25-15, 25-23, and 25-12) that may help the home side make it to the final round of the European Championship. Greece’s team captain Olga Strantzali was the real match winner on Sunday as she scored 30 points all alone, including 13 aces (!). The third set was probably the turning point of the match especially after Finland had stormed out to a massive 8:1 lead. Greece responded by leveling twice at 9 and 18, Alexandra Psoma scored for the 23:22 in favor of the home side before Anna Kalantatze and Anthi Vasilantonaki added two more for the final 25-23. Greece eventually dominated the fourth set and could celebrate a well-deserved win. “It was very difficult, especially after losing the first set, but our serve worked really well and we made it” said a happy Strantzali after the game. Looking forward to the match with France on Monday that will determine the side finishing first in the group, head coach Dimitris Floros says: “We are all very tired but I think we are also motivated enough to claim also our last match of the tournament”.

Azerbaijan rounded out the program of the day by edging Denmark in five sets (25-13, 25-10, 22-25, 14-25, and 15-7) to claim their second win of the tournament. Nikalina Bashnakova and Yuliya Psanichnykh paced the winning side with 25 and 21 points respectively. Denmark had moved up 12:11 in the opening set but after a 13:0 run Azerbaijan could flip the charts around to claim the first set 25-13. The girls coached by Aleksandr Chervyakov dominated the game in the second set (25-10) but after they opted for their second lines, Denmark could storm back and eventually call for the tie-break. There Azerbaijan chose to play with their best players, opened strong (10:4) and could eventually celebrate a 3:2 win.