One year after taking over the coaching job of the Mexican junior and youth teams, the Argentinean Estanislao Vachino can exhibit tangible achievements that suggest a promissory future for the second most populated country within NORCECA Confederation. 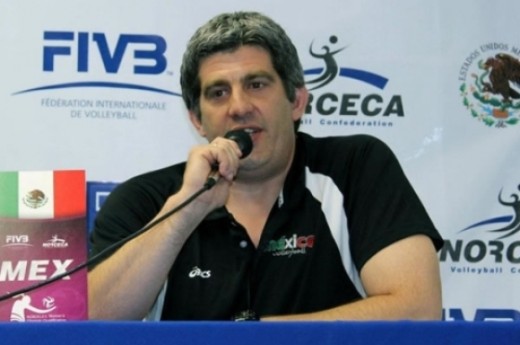 Those achievements granted Mexico berths in the 2013 FIVB Youth and Junior World Championships to be held in Thailand and Czech Republic.

Vachino, who polished his coaching career in Brazil, is confident about the chances of Mexico to finish among the top-ten in the junior world championship mainly because many of his players have been competing against the senior teams of the region at events like the Women’s Pan American Cup.

“The experience of those players will be very helpful to increase our chances of a good result in the Czech Republic,” commented Vachino after a training session at the High Performance Center in Tijuana. “We completed a phase of training with very intense court practices and also work with weights and at the track facility.”

The authorities of the Mexican National Federation, presided over by Ismael Acosta, expressed both satisfaction and enthusiasm about the new trend the national teams are taking with the coach Vachino.

“We are very satisfied with the results attained last year and now we are prepared to compete in the world championships,” Acosta said. “Then we have to continue our development within the new Olympic cycle that includes the 2014 Central American and Caribbean Games to be held in our country in the city of Veracruz.”

The National Federation has embraced a long-term program whose main goal is to convert volleyball into a massive discipline.

The national teams of age-group categories currently include players from the states of Yucatan, Michoacan, Nuevo Leon, Colima, Sinaloa and Baja California.

YEC M: Russia and Slovenia secure ticket to final round