YEC M: Russia and Slovenia secure ticket to final round

Russia and Slovenia have already secured their qualification to the final round. They did so as on Sunday Russia downed Ukraine in three sets to cement their leadership in the group with four wins and no sets lost at all while Slovenia did the same routing the hosts of Latvia in straight sets too. 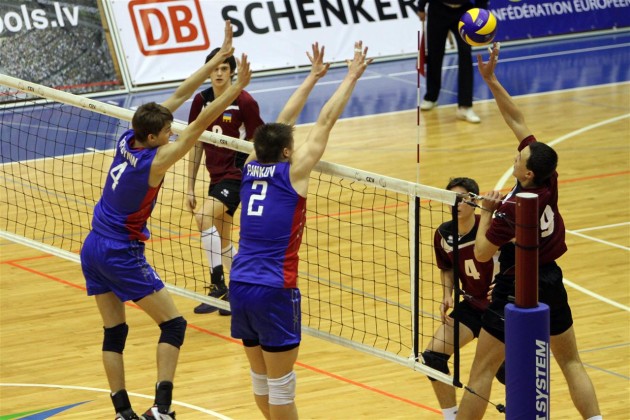 Sunday’s program was opened by Estonia’s win over Norway at the end of five long sets (25-23, 22-25, 25-19, 21-25, and 15-12). Oliver Orav paced Estonia with 29 points while Rune Fasteland contributed 18 for Norway in that losing effort. Norway’s head coach Haruya Indo – who hails from Japan – was a bit disappointed after the match: “We were leading 18:9 in the fourth set and did win that section only at 25-21. I did many changes in the tie-break to fix our problems but it did not work. By the end it was all about mental attitude and we could not succeed. I hope that we can win our last match tomorrow”.

Russia was simply too much to stand also for Ukraine and quickly cruised to their fourth win in straight sets (25-11, 25-12, and 25-15). Kirill Ursov top scored for the winning side with 14 points while Yevhenii Kisiliuk registered 7 for Ukraine. That win was a special present for Russian libero Evgenii Andreev who today celebrated his 18th birthday. “We of course wanted to play better but Russia is much better than all other teams starring in this tournament. We had played them at the EEVZA Championship in Tallinn and we knew that today was not going to be easy for us. After the first set I decided to play with my second lines resting our starting six for our last match with Latvia on Monday. I think this is a good tournament because with the exception of Russia all teams are good and perform at a similar level” said Ukraine’s mentor Yurii Dmytriiev after the match.

In the other match of the day Slovenia edged Latvia in straight sets (25-19, 25-23, and 25-21) to claim a ticket to the final round. Sergej Drobnic, Primoz Vidmar and Ziga Donik all scored 11 points for the winning side while Latvian Aleksandrs Avdejevs top scored in the match with 14.

“It feels great to be qualified to the final round with one round still to go. Latvia played a good match today and if they had done this in their previous games, they would be ranked much higher in the group” stated Slovenia’s head coach Iztok Ksela.