As Greece’s national league sponsored by OPAP got started last weekend, Ethnikos ALEXANDROUPOLIS claimed a very close game against their neighbours of Aris THESSALONIKI. Ethnikos – which is set to represent Greece in the 2014 CEV Volleyball Cup – needed two and a half hours to finish it off at the tie-break (25-20, 26-28, 25-13, 24-26, and 15-7). 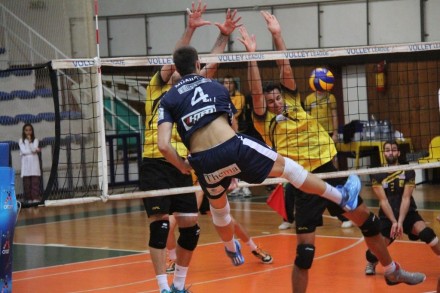 It was a very important away victory for Ethnikos to start their season with; Serbian wing-spiker Nikola Mijailović top scored in the game with 28 points as Ethnikos displayed a terrific defence play with 21 blocks in the end. Georgios Papazoglou killed 13 of these blocks while Mijailović contributed another three to the final count. Ivan Raič and Anestis Dalakouras also finished the game in double digits with 19 and 16 points. Aris also played a very good game, especially with their wing-spikers, but fell behind quite early in the tie-break and could no more find a way to catch up with their opponents. Athanasios Papadimitriou and Apostolos Armenakis top scored in the end for the team coached by former international star Andrej Kravarik with 21 and 18 points respectively. With this 3:2 win Ethnikos got their revenge for the defeat they had suffered to Aris one week before in the opening stage of the national cup.