After losing 1:3 the away match in Greece, Noliko MAASEIK will host on Tuesday Olympiacos PIRAEUS for the fourth round of action in Pool B of the 2014 CEV DenizBank Volleyball Champions League – Men. Olympiacos is currently ranked second in the group whose standing is topped by Russia’s champions Belogorie BELGOROD. 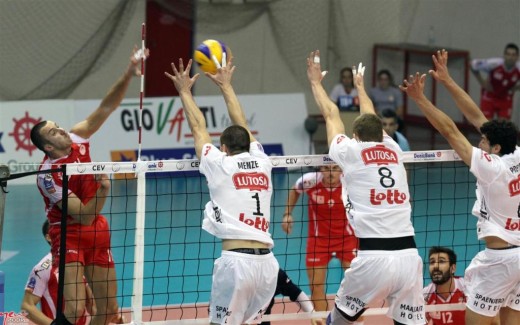 “In Greece we missed out on the opportunity to win” says Noliko head coach Erik Verstraten. “My players will be extra motivated to make up for their defeat so as to keep alive our chances to make the Playoffs 12” continues the Belgian mentor who just replaced Vincenzo Di Pinto at the helm of the team.

“This is a very important game for us” says Olympiacos mentor Dimitris Kazazis. “It is the most difficult and important match for Olympiacos since the start of the season. If we win also in Belgium we will make a huge step forward in our quest to claim a spot for the Playoffs. Noliko is a tough opponent especially as they play at home but we feel ready to take on this challenge and hope to win in Maaseik as well.”

The game with Olympiacos will mark 200 matches played by Noliko in the European Cups.

“Our story got started on November 1, 1986 as we played an away game in Leipzig, which was back then East Germany. Since then another 198 European matches have been played by our team and so on Tuesday we will make it to 200” says General Manager René Corstjens. “So far we have a record of 122 matches won and 77 lost. We have played 156 games in the Champions Cup and Champions League and we are evidently very proud of achieving this record. We have made the final four of the Champions Cup three times, another three times the finals of the CEV Cup and we also starred two times in the Supercup. We have won four silver and three bronze medals so far and we evidently are delighted with our success story in the European Cups” he concludes.

CL M: Paris Volley have to win against Budvanska Rivijera