GRE: European League seen as precious opportunity to prepare for next qualifiers

With this year’s CEV Volleyball European League about to start in some ten days, Greece’s national teams can’t wait for this campaign whose goals were shared yesterday at the premises of the Hellenic Volleyball Federation by President and CEV Board member Achilleas Mavromatis together with head coaches Alekos Leonis and Dimitris Floros. 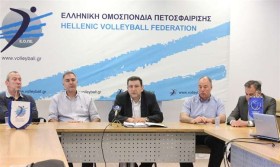 “If you analyze the current panorama, you may see that Volleyball national teams may be divided into four sub-groups. The top is made up of the teams that are playing the World League and make it to the final stages of the European and World Championships” said Leonis, who is mentoring the men’s side. “A second group comprises teams like Finland, Slovakia and Spain which are trying to find their way to the top. Greece belongs to the third level but still our main goal remains to qualify for the final round of the 2013 European Championship in Denmark and Poland. In this year’s CEV Volleyball European League we will be playing two strong and up-and-coming sides, i.e. Spain and Slovakia, so we have a lot to take from this competition. This is true especially since our group will include many young players after Filipov and Fragkos got injured while other guys like Tzourits, Koumendakis, Kokkinakis and Roumeliotis have decided not to join the national team this season”. The group will debut in the European League this coming May 24-26 by hosting in Katerini the teams of Israel, Spain and Slovakia.

The head coach of the women’s national team, Dimitris Floros, knows his group is not up to the standards set by the men but is nevertheless happy to be able to work with some young players: “As we join the CEV Volleyball European League, I always stress that there is no match that shall be seen as a waste of time. Two very strong sides, the Netherlands and the Czech Republic, were assigned to our preliminary group but even if we lose there will be many positives we can take from such matches. So, there was no reason to skip this competition as we know we have to work a lot and finally some good days will come back for Volleyball in Greece. Papageorgiou and Milona won’t be able to join our group for the start of the competition and the same applies to Kavatha. However, our young players look in good shape and I fully trust them” he said.

Mr. Mavromatis stressed: “Last year we declared that our main short-term goal was to qualify the men’s national team for the final round of the 2013 European Championship. If we want to achieve this, we first have to perform well in the European League thereby getting well ready for the next qualifiers and testing our players. Things could have gone better in the preparation stage but our financial situation makes everything very complicated. So the European League remains the main test whereby we can prepare the European qualifiers coming up next September”.