Italy scored on Saturday its second win in Brno by edging Germany in straight sets. In the other match of the day Belarus upset France 3:2 for what was the second consecutive defeat suffered by the guys coached by Slimane Belmadi. 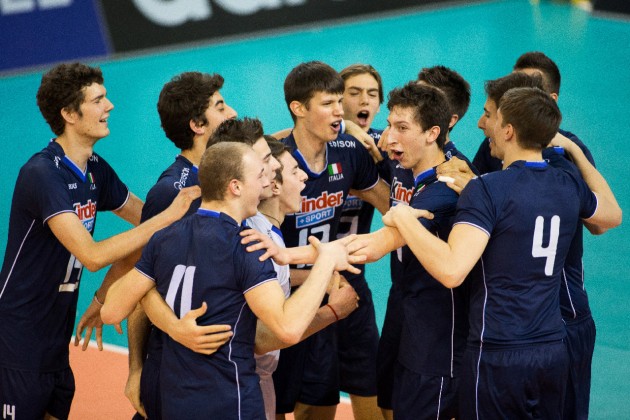 Italy totally dominated the scene in the first set of their match with Germany (25-11) with Tiziano Mazzone and Riccardo Mazzon shaking Germany’s defense line with their mighty spikes. Still Germany could step up in the second set that was decided in a close final rush where Italy went up 21:19 and did not lose composure until the score was sealed at 25-23. Germany caught a good start in set 3 and went up 16:11 before widening the gap at 20:13; still this was not enough to bring it home as Italy fought its way back and could silver its first match ball for the final 3:0.

“It was a very tough match and for such young players the obligation to win may result in real stress and a loss of composure. However, we got our second win and we are happy with this” said Italy’s head coach Andrea Tomasini.

“We could not find our way into the game; our reception was bad and could not exploit our middle blockers. Even though we improved throughout the match, we could not finalize a third set where we got up by seven points. Italy accelerated the pace and we were somehow penalized also by a decision of the referees” stresses Germany’s mentor Matus Kalny.

In the other match of the day Belarus edged France in five sets to stay in contention for a spot in the final round of the Championship. France started the match as the clear-cut favorite but Belarus confirmed the good impression left after Friday’s win over the Czech Republic. After a 2:2, the tie-break was played and there Belarus opened strong going up by two points and then moving the score to 11:7. France cut the gap to only one point but Belarus got a series of match balls at 14:12 after a good serving turn by their top scorer Radzivon Miskevich (31 points in the game). Two points later Belarus could celebrate their second win in the tournament.

“We have played three matches so far here and all have ended at the tie-break. We got two wins and so we are quite happy” said Miskevich. “We are evidently tired but we need to mobilize our forces for tomorrow as we play Italy. If we win, we have a chance to make it to the final round”.

“It is difficult to find the right words. We lost but tomorrow we have a day of rest, we’ll sleep and reset. On Monday we’ll try our best to beat Germany in three sets” concluded a disappointed head coach of France, Slimane Belmadi.