Luxembourg will fight for the Cup playing Norway while the men will most probably have to be content with second place after losing on Saturday to the guys from Scandinavia. In the other match of the day for the men’s competition, England beat a Czech selection. 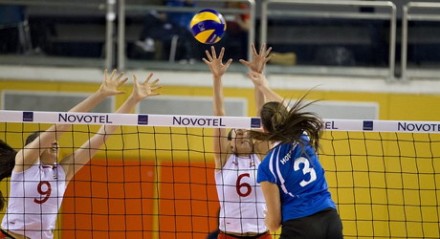 The local heroes eventually lost 1:3 to Norway (22-25, 25-22, 15-25, and 24-26); with head coach Burkhard Disch having opted for the same starting six of Friday’s victorious debut against England, Luxembourg quickly trailed down already in the opening set but with some points contributed by their captain Ralf Lentz, they eventually almost leveled the count by the second technical time-out (15:16). However, Norway fired back and demolished the defense system of the home guys going for the provisional 1:0 (25-22). Luxembourg caught a good start in set 2 going up 8:4 and widening the gap to 12:4; Norway clawed back from 19:13 to 21:18 but it was too late and Luxembourg could celebrate the provisional 1:1. Luxembourg changed a couple of players in their starting six during set 3 with Andy Koenig and Robert Tomsicek replacing Tim Laevaert and Gilles Braas but this could not prevent Norway from going for a speedy and comfortable 25-19. Luxembourg set the pace of the game almost all the way through in set 4 constantly leading by three, four points but after missing an opportunity for the tie-break at 24:23, Norway scored the next three rallies to finish it off with a 3:1 win.

In the other match of the day for the men’s competition, England beat a Czech selection playing as “West Bohemia” in straight sets (25-23, 25-17, and 25-20). The Czechs quickly trailed already in the opening set before they drew level at 6 but after a neck-to-neck race, England could bring it home down the final stretch (25-23). England then controlled the game with ease in the second set (25-17) and did so also in the third set to claim its first win in the competition after losing on Friday to the home guys of Luxembourg.

If the men – after losing to Norway – won’t most probably win the trophy, the home heroines are still in contention for first place after claiming a real marathon with England on Saturday (3:2; 22-25, 25-21, 25-18, 19-25, and 15-12). Luxembourg opened strong leading the way by three, even four points in the first set anchored by their opposite Betty Hoffmann, but they eventually could not stand the comeback of their opponents (22-25). After a disastrous start due to a shaky reception (4:10), the home ladies were able to fight their way back in set 2 leveling at 12 and with good blocks they eventually drew level also in sets (25-21). Supported by their fans, the “Lionesses” did show good quality and composure also in set 3 (25-18) but England played with glowing hearts to call for the tie-break. With Betty Hoffmann on fire, Luxembourg set the tone there right from the beginning (8:7, 10:7) and ultimately could celebrate their second win in the tournament (15-12).

In the other match, Norway easily disposed of Scotland in three straight sets (25-13, 25-10, and 25-22). Norway’s supremacy was evident especially in the first and second set where Scotland did not find a way to stop the Norwegian attackers at the net. Scotland got a little bit more into the game in set 3 but after coming back to possibly re-open the match, it was Norway that scored the deciding points for a 3:0 win, the second after Friday’s successful debut with England.

During a break of the competition the organizers awarded a few former members of the national team, namely Tania Karier, Lynn Elouardi and Martine Weber.

STORY FROM PYONGYANG: Serbian coach – only...