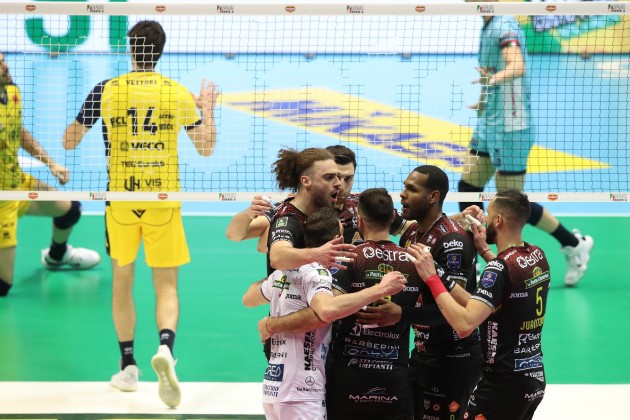 Cucine Lube Civitanova reached the final of the Italian Men’s Del Monte® Coppa Italia for the 5th consecutive year and tomorrow night will go out on the court to defend the trophy they won a year ago in the same city and hall at which next gold medal encounter will take place – Unipol Arena in Casalecchio di Reno (Bologna).

In the other semifinal, Sir Safety Conad Perugia swept unrecognizable Itas Trento. Led by exceptional Cuban-Polish Wilfredo León (27 points; 71 % attack – 15/21, blocked 1 time; 8 aces; 4 blocks), the team commanded by Vital Heynen dominated the match against the rivals who had arrived at this match with 16 consecutive victories between domestic competitions and those in the CEV Champions League. Brazilian Ricardo Lucarelli was the only player on the losing side in double digits in scoring (10 points). The top scorer of Trentino and SuperLega, the Dutchman Nimir Abdel-Aziz heavily underperformed (6 points; 26 % attack)

All in all, Lube and Perugia will meet in the Cup final for the fourth season in a row.