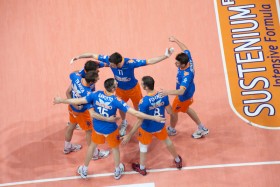 Dario Simoni (ass.coach Andreoli Latina): “The win over Cuneo gave us a boost. We have never won two in a row this season, we’ll try to do that now. Monza is an excellent team built to do well both in the league and Europe. We’ll not be the favourite, but this year there have often been surprises. Monza have good blockers with Buti and Shumov, but they have weaknesses in other areas of which we’ll have to take advantage”.

Marco Fenoglio (ass.coach Acqua Paradiso Monza Brianza): “I think Sunday’s game will objectively be an important one, and difficult as well. It’s been an intense week, with a trip to Romania, and tomorrow we’ll be off to Latina, by train. It’s not been a simple week. Latina is playing at a high level, so this will be tough for us. We’re aiming for fourth place: Modena has a tough fixture list ahead, and we are two points behind. We’re going to Latina to get the win and the three points”.