The Del Monte A1 Italian Cup Final Four was presented in Roma. After the V-Day 2011, in which Trentino won the league title, the capital will host another major event organised by the Italian Volleyball League in collaboration with Volley Events 2020. 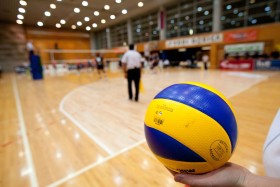 The four teams to take part will be Macerata, Trentino, Modena and Belluno.

The winner will be qualified for next season’s Champions League.

There will be extensive TV coverage, in Italy with Rai Sport, and abroad with Eurosport, AlJazeera and BWIN.

“Our hope, after the great work done in the World Championships and the success of the V-Day, is to contribute in supporting the candidacy of Roma to host the Olympic Games” said Massimo Mezzaroma, president of the Volley Events Roma 2020.

“This year there will be some new fixtures – explained Italian Volleyball League CEO Massimo Righi – We will give the opportunity to the fans, both at home and at the arena, to vote for the MVP”.

Various charity initiatives will be supported as well.