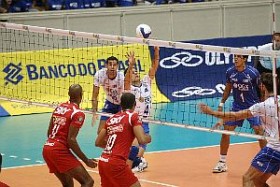 The confrontation between RJX Cimed and / SKY was balanced

The pointer Dante was brilliant and helped RJX achieve the major victory. He was the leading scorer of the game with 19 hits in attack, and he also received the trophy Viva Vôlei  after being considered the best in the game. The opposite Rivaldo of Cimed /SKY was the highlight and also scored 19 points.

Dante said the development or the team. “It was a good game. The league is very balanced. We beat the team that was in the lead and never missed five games. We are evolving and winning together. We started well but fell slightly in the third and fourth set. I am glad for the prize, but volleyball is a team sport, ” said Dante.

The pointer of RJX highlighted in the last five victories of Cimed /SKY against UFJF, BMG São Bernardo/Londrina/ Sercomtel, Medley / Campinas and BMG / Monte Claros, since the coach Chiarotti Douglas took over the team from Santa Catarina instead of  Mark Pacheco.

The coach of RJX, Mark Miranda, also addressed the growth of the team.

“Throughout the first round we lost some games in which we had many oscillations in the play. Today we also had ups and downs, but the team showed strength in the fifth set. This proves that we are evolving,” said Marcao.

On the side of Cimed / SKY, the central Gustav, who entered during the match and did not leave it untill the end, spoke about his return to games after recovering from an injury.

“The game was very disputable. We made many mistakes in service, which should not have happened. We managed to get the match, but lost some chances in the fifth set. I still need fitness for a match, but it was good to play more during the game. Now I have to train much more to help the team, ” said Gustavo.

The teams of Carioca and Santa Catarina returned to the  fifth round of tournament on different days. On Fiday (10.02), Cimed / Sky will face Vivo / Minas (MG) at 21h,in ArenaVivo in Belo Horizonte (MG). Sportv will broadcast the confrontation. Very soon on Saturday (11.02) at 18h, RJX will receive UFJF in the hall Maracnãzinho, in Rio de Janeiro (RJ).

With the results got on Wednesday, Sesi-SP that won BMG /São Bernardo in the opening round, on Tuesday (07.02) took the championship lead with 34 points. Vôlei Futuro takes second place and Cimed / SKY is in on the third place. RJX is on the sixth place on the scoreboard.

Cimed / SKY got better in the match. With the point from the block by the center Eder against the  attack of Riyadh, Cimed / SKY opened the set with 4/1. Until the first timeout, the team of Catarina maintained the three-points lead (8/5). The play was good for the hosts. The pointer Dante got a point from simple block, and the locals tied the set (8/8). The set was played point by point. RJX went to the second technical timeout with the lead of (16/14). With a good series of services of Bruno, the difference dropped to a point in favor of the team of Carioca (22/21). Nevertheless, RJX got the reaction of Cimed / SKY and finished the first set with 25/23, with the point from the counterattack of the opposite Theo.

Cimed / SKY returned to the second set, ready to change the situation of the game and opened it with 3/0. With three consecutive points of the pointer Lipe, RJX evened the score (5/5). The teams took turns leading the score. With a fine counter-attack of Theo, the locals went to the second technical timeout having the lead (16/14).

The coach Douglas Chiarotti, of Cimed / SKY, changed the centers and put Gustav instead of Eder. The substitution was effective and the team of Catarina evened the score 18/18. In the end, the hosts rose and closed the second set 25/22.

The beginning of the third set was marked by balanced playing. Cimed / SKY went to the first technical timeout with the advantage of two points (8/6). The setter Marlon pointed with an ace and the locals evened the score (8/8). From this moment, Cimed / SKY showed tempo in the game. With good services and counter-attacks, Cimed / SKY got six points (14/8). RJX played better at the end of the set, but Cimed / SKY closed the set with 25/18.

At the beginning of the fourth set RJX won two points (8/6). With good run of services of Bruninho, Cimed / SKY evened the score (15/15). The pointer Dante played a nice counter-attack and the difference was again two points for Carioca (18/16).

The excitement rose in the game. With two points from block, Cimed / SKY turned its result (22/21). In the final part played point by point, the team of Santa Catarina intensified the play in the match by winning the fourth set with 26/24.

RJX  got back in the fifth set better and opened it with the lead of two points (4/2). With a good run of services of João Paulo Tavares, Cimed / SKY evened the result  (5/5). As the block of RJX started functioning again  the team of Carioca won three points (10/7). The difference was maintained until the end and RJX won the set with15/12 and the match with 3:2 in sets.

Brazil: SuperLiga FEMALE 11/12: Joycinha, of Vôlei Futuro is the highlight of the third round of the tournament