Brazil: SuperLiga FEMALE 11/12: Joycinha, of Vôlei Futuro is the highlight of the third round of the tournament

RIO DE JANEIRO, 02.08.2012 – In the third round of the tournament Superleague women's volleyball 11/12, the opposite Joycinha was the highlight. The hitter of Vôlei Futuro was the best player in attack and the third best in defense, therefore, the best in the round after the victory of the team Araçatuba over BMG /São Bernardo with 3:0 in sets. 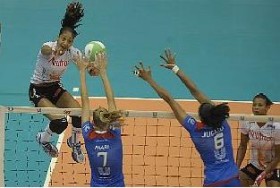 Joycinha tried to point in the attack in the previous match

The SESI-SP also won the tip and had Soninha as the top scorer of the round.

Soninha scored 23 points in the victory over São Caetano with 3:0 in sets.

Despite the loss against Unilever, also with 3:0 in sets, Mackenzie/ Cia de Terno had the best player in service: the opposite Ingrid.

And the team had good performance of Fernanda Venturini, who was voted the best sportswoman in the round in service.

The Sollys / Nestlé defeated  Rio do Sul with 3:0  in sets and had two players among the best: Thaisa in block and Samara in defense.

The libero of  Banana Boat /Praia Clube, Arlene, proved that, at the age 42, she is still in good shape.

Arlene was the mistress of the best reception and was also the best libero in the third round of the tournament when the team of Minas won Pinheiros with 3:1 in sets.

The best player: Joycinha (Vôlei Futuro) – the first in attack and the third in defense

Italy: 25 year history to be celebrated in Treviso