Trentino Volley made another important purchase in the 2013 summer market. A twenty-two year old Sebastian Solé came to cover the position at the center of the network. 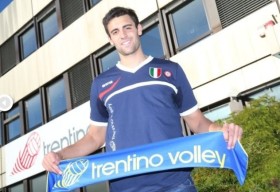 Being already several seasons in the national team of Argentina, he arrived from Drean Bolivar, last season’s 3rd team in Argentine Serie A1. The athlete born in Rosario, came in Trento on Tuesday and was presented to the press this afternoon at the “Trentino Volley Point”.

On that occasion, in 2010, his ways for the first time crossed with the Trentino’s: on December 17, Trentino beat his team, Bolivar 3-1 in the second round of the first stage of the Club World Championship. Solé realized eight points, putting himself into light, especially in the block.

In Trentino he will find himself along with Donald Suxho again, with whom he shared the dressing room in the previous season with Drean Bolivar.

“Solé is another one of those young and promising players that we have secured in this summer’s market session to start with a completely new cycle,” said the coach Roberto Serniotti. “I followed him carefully since the time of the 2009 World Pre-Junior Championship. I have seen him in action in Jesolo and since then, I’ve always followed him with particular interest because I think he showed a great potential and talent in very early age.”

From tomorrow morning, Sebastian Solé will join the “yellow and blue” team that has been working for three days.

See the WoV Community profile of Solé and Trentino.

ITA M: Another Frenchman is coming to...