World No 5 at Junior and Youth ranking Brazil overpowered No. 26 Italy in a gruelling match 3-0 (25-21, 35-33, 25-23) to open their Pool D campaign victorious in FIVB Men's U21 World Championship at Ataturk Hall in Izmir, Turkey on Thursday. 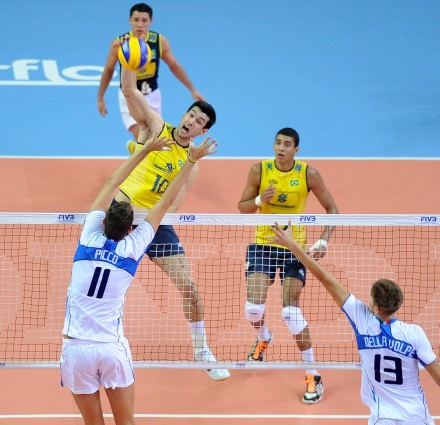 Brazil’s outside hitter Alan Souza led his team scorers with 18 points including 2 blocks and one ace service. Italian opposite spiker Luigi Randazzo scored impressive 20 points to come as match scorer from his side.

Brazil started using their unstoppable sharp spike services which put a pressure upon the Italians. Brazil led throughout the set till they won 25-21. The second set was the most exciting with the Italian big gun Luigi Randazzo sending his sharp hits from all the net positions as they lost 6 set points before Brazil rebounded and kept rhythm to win the Marathon set 35-33.

The Italian team again committed frequent mistakes in the third set, while Brazil team was more motivated to continue their lead until they won the set 25-23 after a great fight from the Italians.