China won their first match at the FIVB Volleyball Men's U21 World Championship in a convincing manner. The Asian powerhouse proved too strong for their first opponent Morocco and achieved a straight-set victory by 3-0 (25-21, 25-19, 25-21) in the first Pool A encounter at Baskent Volleyball Hall in the Turkish capital Ankara. 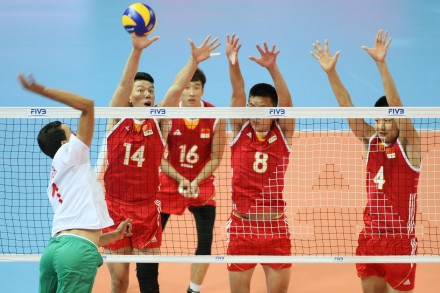 The block was China’s main weapon to earn the victory

China took advantage of the too many mistakes Morocco made in the first set to establish control of the scoreboard and gradually move to a final score of 25-21. Thanks to some excellent serving, the African team rushed into the second set with a 4-0 advantage, but it did not last long. China’s powerful blocks not only brought the team from behind, but also helped them break away in the score. A fast attack by Zhen Qin (CHN) shaped up the final 25-19 in his team’s favour. With a whole-hearted fight for every ball, the Moroccans were able to keep up with China’s pace through the second technical time-out of the third set, but then the Asians managed to stay more focused on court to gain advantage. In the last rally of the match Tingwei Yan (CHN) reaffirmed his team’s great performance in offence by finding the empty spot on the opposite side of the net with a brilliant hit for the final 25-21.

Morocco’s captain Zouhair El Graoui topped the scorers’ chart of the match with 18 points. Tingwei Yan with 12 points and Zhen Qin with 11 points were China’s most prolific players in this game. The winning team’s strongest weapon was the block. It contributed 10 points to the victory, nicely spread out among all Chinese players.