The Italian Volleyball League Serie A has launched today a new schedule for the upcoming season. 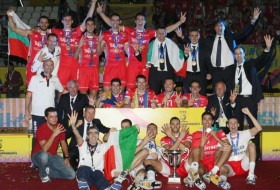 During the session the possibility to forward the start of the Serie A1 by one week was also taken into consideration, given the lack of participation of the Italian Under-23 players at World Cup in Brazil on October 7-13.

The clubs have however evaluated to leave unchanged all the dates until Christmas, given the complexity of the reorganization and restrictions on competition venues.

However, Del Monte Italian Cup will be postponed for few days (originally set for January 11 and 12) giving more “breathing to the players before and after the great international events”, in particular the qualification for the World Cup in January 2014.

There are three regular-season dates changed. Round 11 was postponed from December 26 to January 8, Round  12 to January 12, while Round 20 will be held on February 19.

The dates of the Del Monte Cup Italy are also changed: the quarter-finals will be played on January 29, the Final Four on March 8 and 9.

The launch of the season with Del Monte Super Cup is confirmed for Wednesday, October 9.