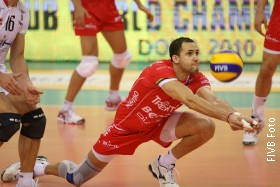 The north Italian club added to their 2007-08 season triumph, grasping victory from the jaws of defeat, despite being down 18-13 in the third set.

Cuban-born Osmany Juantorena was once again central to Trentino’s win, scoring 22 points in the final and picking up the MVP award. He won the same award at the Men’s Club World Championship in 2009 and 2011.

“This has been the most difficult victory ever, but also the greatest one because the game was very near to being lost,” Trentino’s Bulgarian captain Matey Kaziyski said. “We came out of a very tricky situation and to be honest at one point I really thought I would not win the Italian Cup”

Macerata will not have to wait long for revenge however as they host Trentino in the CEV Champions League Playoff Six on Wednesday. Trentino will be looking to dispose of their rivals again to stay on track for a fourth crown in a row, a feat only matched by Russia’s CSKA Moscow from 1985 to 1989.