Macerata, Italy, February 20, 2012. The Italian derby starring the triple European and World champions of TRENTINO PlanetWin365 and Lube Banca Marche MACERATA is certainly the major highlight in the Playoffs 6 of the 2012 CEV Volleyball Champions League – Men. 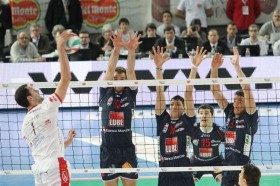 And additional flavor is contributed by the simply classy match that these sides delivered this past Sunday for the final act of Italy’s national cup in Rome where TRENTINO eventually seized the night but only after coming back from two sets down and what was a literally breathtaking tie-break.

Everything will start from the scratch on Wednesday at “Palasport Fontescodella” in Macerata as the home guys of Lube Banca Marche have got the opportunity to go for revenge in front of their always passionate fans.

“We know that TRENTINO is certainly the strongest team out there at the moment” says team captain Igor Omrcen, “but after the final of the national cup we realized that we can stand their level and possibly bring the match home. With the return game set to take place next week in Trento, we definitely need to score a win on Wednesday” he adds.

This is the second derby for MACERATA after the side mentored by Alberto Giuliani edged Bre Banca Lannutti CUNEO in the Playoffs 12, coming back from a home defeat in straight sets to go for an away win and afterwards take also the deciding golden set.

The sports hall is already sold-out and the match will be a remake of the semifinal that TRENTINO claimed some 3 years ago in Prague.

“We need full support from our fans because this, combined with the return next week, is the most important game of the season. We need to display our best Volleyball to win” concludes libero Jean-Francois Exiga.