Tirana, Albania, February 20, 2012. The Volleyball season re-started in Albania after a short break with the qualifiers for the women’s national cup which took place in two venues and lasted for a total of three days. 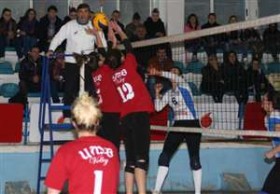 As for the men’s competition, this is scheduled after the end of the national league, i.e. for next April.

This revision of the calendar was made in order to provide some additional opportunities to get the right conditioning for the players that will be representing Albania in the first round of the 2013 CEV Volleyball European Champs with home and away matches against Great Britain slated for mid May.

The qualifiers of the women’s national cup were joined by a total of eight teams divided into 2 groups of four each.

The finals of the national cup coming up next May – upon completion of the national league – are finally joined by Tirana and UMB Volley who qualified through group A held at “Fahrie Hoti” sports hall, while Minatori and Teuta came out on top of group B that was staged at “Ramazan Njala”. No surprises were registered in the qualifiers and the next major Volleyball happening in Albania is the final stage of the men’s national league.

CEV CL: VfB FRIEDRICHSHAFEN has nothing to lose in Playoffs 6