CEV CL: VfB FRIEDRICHSHAFEN has nothing to lose in Playoffs 6

Friedrichshafen, Germany, February 20, 2012. Another challenge in the 2012 CEV Volleyball Champions League for Germany’s VfB FRIEDRICHSHAFEN: on Wednesday afternoon the German champions visit Russia’s Zenit KAZAN for the first of two duels in the Playoffs 6. “We just can win”, says FRIEDRICHSHAFEN coach Stelian Moculescu. “We have nothing to lose”. 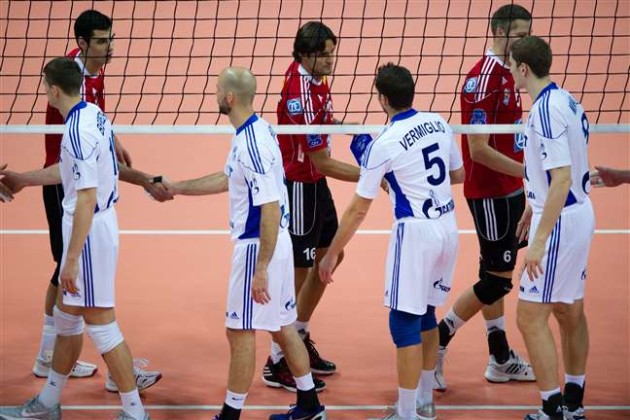 VfB FRIEDRICHSHAFEN has nothing to lose in Playoffs 6

For VfB FRIEDRICHSHAFEN it is the ninth participation in the Playoffs 6 or 1/4 finals of Europe’s most elitist club competition.

Only one stop is left before making it to the final four scheduled for mid March in Lodz, Poland.

The original goal, which was to make it through the prelims, is already exceeded.

“The qualification for the Playoffs 6 which may be compared to a 1/4 final is a great success”, says Moculescu.

VfB FRIEDRICHSHAFEN enjoys being part of Europe’s elite in Volleyball.

And the Germans remember very well their incredible home victory against Zenit KAZAN in the last leg of the League Round.

But in spite of it nobody at the Lake of Constance expects one or maybe two victories against the stars from Russia.

During the 2012 CEV Volleyball Champions League no opponent was able to win a set there.

“It is a very high hurdle”, so Moculescu.

Furthermore his team has to continue playing without opposites.

Estonian Oliver Venno got injured 10 days ago and will not travel to Russia with the team.

Serbian Zoran Jovanovic has still problems with the muscles of his hitting arm, but nevertheless joined the group for the trip to Tatarstan.

Therefore most probably middle blocker Marcus Böhme will have to take up that vacant position.

“He shall use his power”, advises Jovanovic.

“He is the strongest and tallest man in our team. He shall take advantage of these qualities”.

Anyway – with a surprising victory or a defeat of FRIEDRICHSHAFEN in Russia – the decision about the qualification for the final four will be made in Germany next Tuesday in front of a full ZF Arena.

“We deserved this match in front of our home crowd”, says Moculescu.

“We can celebrate a big, big Volleyball party”.

Zenit recently completed the regular season of the Russian Superleague by downing Ural UFA in straight sets to take the first place in the charts of the Eastern Conference and advance directly to the 1/4 finals by-passing the Playoffs.

The Tatars have devoted the last 10 days exclusively to the preparations of their match with Germany’s national champions; they will be missing middle blocker Alexander Volkov and also second setter Alexey Babeshin who are still nursing their respective injuries.

On the other side of the net VfB FRIEDRICHSHAFEN will be playing without Estonian opposite Oliver Venno who injured his ankle during the next-to-last Bundesliga match against BERLIN Recycling Volleys.

“This is true especially if you consider that Zenit has won the national league four times and the Champions League only once back in 2008. The Germans, as confirmed by their latest results, are in great shape and this clash will be a real fight, especially the return match coming up next week in Germany” he stresses.