In the opening match of their campaign in the 2014 CEV DenizBank Champions League, the young team of Diatec TRENTINO edged BERLIN Recycling Volleys after comeback in the third set. 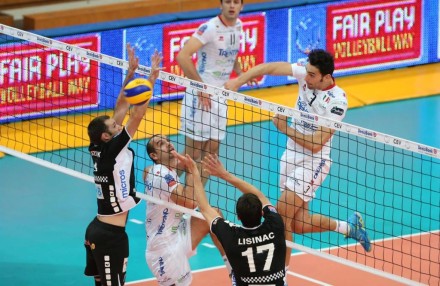 “It was a tough match, as I expected. I did not like our start because we wasted the chance to score points. I would like to spend a few words for Sintini, who is training at his best and until now he had not any chance to play in official matches, but tonight he made the difference and led the team to the victory. Though we have still technical problems to work on, we did not give up and fought until the last point. I really like the attitude of my guys. It is an important win against the strongest team of Pool D” stated Trentino`s coach Roberto Serniotti.

“We did not exploit important situations, especially in the first and third set, and we have been punished by TRENTINO that has changed a lot compared to the past seasons, but it is still very competitive. We should reflect upon our mistakes and try to improve for the next matches,” said the head coach of BERLIN Recycling Volleys, Mark Lebedew.

Italy: Serie A1 Sustenium Round 17