With an immaculate record of two wins and no sets lost so far in the competition, on Wednesday Italy’s standout Lube Banca Marche MACERATA will be hosting defending champions Lokomotiv NOVOSIBIRSK for the third round of play in the “group of death” as Pool E also includes the likes of last year’s bronze medallists and 2012 winners Zenit KAZAN. 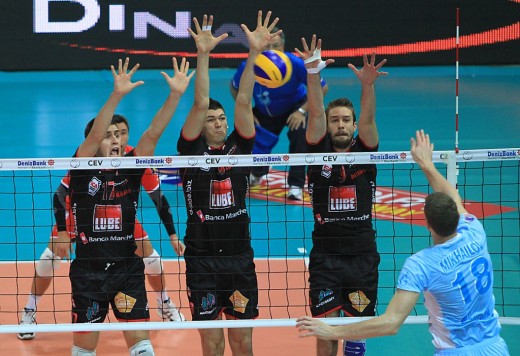 After last week they edged Austrian rookie Posojilnica AICH/DOB in straight sets, MACERATA would certainly love to prolong their winning streak so as to make a step forward in their quest to qualify for the Playoffs 12.

After losing the season’s opener – the Super Cup – to Diatec TRENTINO in straight sets, the Italians are in full swing with a terrific series of straight set wins in the CEV DenizBank Champions League as well as in the Serie A1. However last week wing-spiker Simone Parodi got injured in Klagenfurt during a training session before the match with Posojilnica and he will be out for one month.

“We know very well that this game is crucial and that is why I have asked my players to do their best so as to claim another victory” says head coach Alberto Giuliani. “My team has been playing excellent Volleyball so  far doing so in the national league as well as in the CL matches with Zenit KAZAN and Posojilnica AICH/DOB. I can say that I am satisfied with what we have done so far and to edge a strong team like Lokomotiv would be just the perfect way to continue our march.”