Lube Banca Marche MACERATA will be hosting this Tuesday Austria’s Posojilnica AICH/DOB for its last home match in the prelims of the 2014 CEV DenizBank Volleyball Champions League – Men. 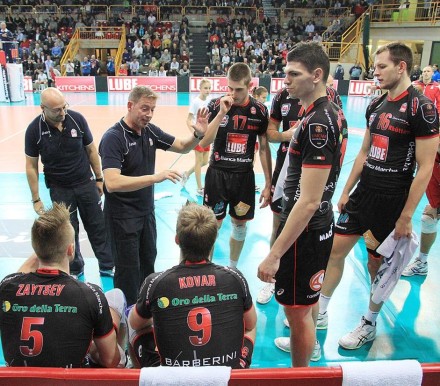 After suffering their first defeat this season in Russia against Lokomotiv NOVOSIBIRSK, the Italians are currently ranked second in Pool E and need to take three points from this game to stay in contention for a spot in the Playoffs 12. Zenit KAZAN is the current leader in the Pool with nine points, while MACERATA is second with eight and NOVOSIBIRSK follows in third with seven points.

“We absolutely must win this match against the Austrian champions” says MACERATA mentor Alberto Giuliani, “and we can’t lose any set because the competition to make the Playoffs 12 will be very close and every single point will count in the end. It will not be easy: though our next opponent still has to win their first game in this competition, for sure they will not make any present to us. My players have to take on this game as if it was the final of the tournament.”

The Italian hosts hope to be able to count on their complete roster for this game as in recent times three of their wing-spikers – Jiri Kovar, Simone Parodi, and Alessandro Paparoni – have all been struggling with injuries. The Palasport Fontescodella shall be sold out on Tuesday and also some fans from Austria are expected travel to Macerata to support their heroes.

FLASHBACK: This guy explains what “save” really...