Looking back upon a successful past week with two victories at national and international level, the team of BERLIN Recycling Volleys has no time to take a breather as they will host Arkas IZMIR for the fifth round of action in the prelims of the 2014 CEV DenizBank Volleyball Champions League this Tuesday. 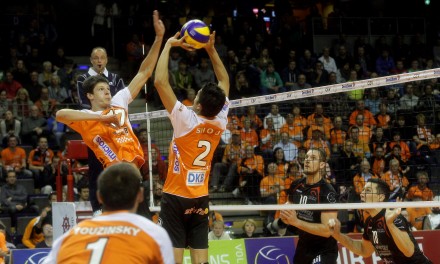 The matches come thick and fast for the 2013 German national champions. It’s been less than a week since the group of head coach Mark Lebedew outdid Energy Investments LUGANO in front of 4.111 spectators at Max-Schmeling-Halle in straight sets.

“Having so many games to play within this short period of time makes it difficult to always give off 100 percent. Even more important is the actual attitude and the will the team brings into the match – and there’s nothing to hold against the team as regards these factors. The players are motivated while being focused on the goals we have set”, the Australian mentor says.

Driven by the ambition to again qualify for the Playoffs 12, the side of BERLIN takes on the guests of Arkas IZMIR this Tuesday. “We know we still have to score points to make it to the next round, but we believe in our chance – and that’s how we will approach the upcoming clash with IZMIR”, Lebedew adds.

Coming with a 3-2 win in an away match against the team of Ziraat Bankasi ANKARA, the guests currently competing among the top three in Turkey are expected to be a hazardous opponent for the home side: “Nationally, their season is well on hand and individually the team exposes a high-quality level. In my eyes, it has not to do with the team’s quality as such that IZMIR did not win any match in this year’s Champions League campaign so far. For Tuesday, I expect a duel at eye level”, Lebedew says.

AS PROMISED – Guidetti jumped into a...