Volleyball is the ultimate team game. And, as the NCAA tournament gets underway Thursday, you'll see the almost uncanny synchronicity of the nation's best teams. Singling out individual players to watch is difficult, especially when they'd be the first to tell you how important everybody else on the floor is. Still, here are five of the very best players in the country you'll want to keep an eye on this postseason. 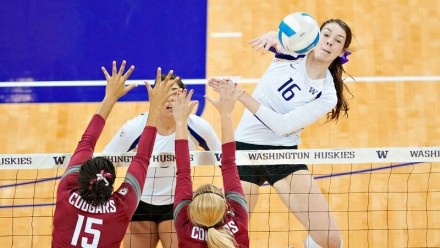 Eckerman was responsible for a team-high 425 points this year, including 371 kills. On a team with a lot of weapons, she is pretty much the deadliest. Six times this season, she had 20 or more kills.

She had 305 kills and 290 digs this season as Penn State won the Big Ten and earned the No. 2 NCAA seed. McClendon’s improvement on defense has been outstanding, and she also has become a leader for the Nittany Lions (28-2), who face LIU Brooklyn in the first round Friday.

Vansant, a junior from Redlands, Calif., had 422 kills and 262 digs this season. She set the tone for the Huskies, who have a big goal in mind. Seattle is the host city for the NCAA final four later this month, so this year has been a “target” season for the Huskies. They really want the chance to play for an NCAA title in Seattle.

Molly Kreklow has been a starter her entire career at Mizzou and will leave as one of the best setters in program history. She has 5,278 career assists — just the second Tiger to top 5,000 — and has directed an MU offense that is one of the most effective and efficient in the country. The Tigers lead the nation in hitting percentage (.362).

Robinson, from Bartlett, Ill., led Nebraska with 481 kills and 356 digs. Although she is an elite hitter at the college level, she also has worked out with USA Volleyball at the libero position, which further illustrates her athletic versatility.