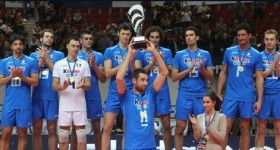 This was however, and before all, the opportunity to honour the memory of Monza’s President, Marcello Gabana, who passed away in a tragic air crash two years ago. Volleyball was Marcello Gabana’s beloved sport and bringing the best players the sport has to offer in the country for him was the best tribute possible.

Among the various other fixtures of this All Star 2011, there was the special guest Cesar Cielo, a record man in swimming, who took a picture with his conational Raphael Vieira De Oliveira. There was also the innovative slow motion camera, which will help evaluate the blocking situations at the net.

Finally, the main man of this encounter was MPV of the Game, Tsvetan Sokolov.

Mauro Berruto (coach Italy): “The quality of this game was very high, thanks to excellent players on both teams. I was  looking for a test before going to Japan and I am very happy to have benefited from this opportunity, this was extremely useful. Besides I feel at home in Monza, I spent a lot of time here this summer with the national team, and I am obviously very proud to be here with these players, not only to celebrate the All Star game but also to pay tribute to Marcello Gabana, which had desired so much to bring volleyball to this arena”.

Dragan Travica (Italy): “We had a good feeling about this game, this was a long one, in which we have been able to try various things. It’s been extremely useful for us, and winning, even in friendlies, is always nice. I hope everybody enjoyed the occasion. As far as I’m concerned, being back in Monza is a great feeling for me. I have had a fantastic experience both as a person and as a professional, and meeting up again with some former teammates and fans was really nice”.Simone Buti (Italy): “I think this game proved there is a good understanding between us. We could see we’re ready for the next ‘official’ test. Now things are getting exciting: I hope to do well in Japan”.

Cristian Savani (Italy): “I think tonight was a great opportunity to play in front of a big crowd of knowledgeable fans at the  end of a week in which there was an intense build up as we’re on our way to Japan. It was nice to see all those people coming here to pay tribute to Marcello Gabana”.

Martin Lebl (All Star Team): “A great night of volleyball, I think the supporters enjoyed themselves, there have been some great rallies. And I think such an event is the best way to pay tribute to a person that has been extremely important to volleyball and to thank his family who keep investing and believing in the sport. Marcello Gabana would have loved an evening like that”.

Osmany Juantorena (All Star Team): “When they called me to come to this All Star Volley to honour the memory of Marcello Gabana, I immediately accepted. The game was long and hard-fought, despite the fact that was a friendly. Congratulations to the Italian national Volleyball team and best of luck to them for the World Cup in Japan”.

Radostin Stoytchev (coach All Star Team): “It was a honour to coach a team with so many stars and in such an important evening. I thank the players for coming here tonight and the Gabana family for giving me this opportunity. They are a great family who are giving so much to Italian volleyball”.

Ricardinho presented – “I know what Lube...